The new Delta Goodrem album is out now and it's a beauty. Titled 'Child of the Universe', Delta fans will adore her new slew of songs, including the first single released, "Sitting On Top Of The World" and “Wish You Were Here”. 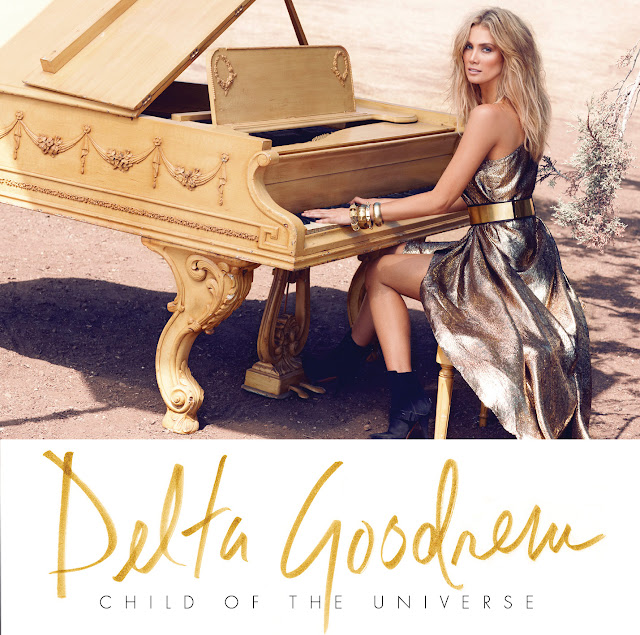 In the time since Delta's last 2007 album release, she has grown from a 23 year old young singer-songwriter with three number one albums to her credit, to a respected artist, and a gorgeous woman with the lots of life experience under her belt.

In the past, Delta has always described her albums as marking chapters in her own life. But 'Child of the Universe' changes everything for her, stylistically and spiritually.

Delta recorded 15 tracks for the album, selected from hundreds she has written and co-written in these past years. Among the chosen few that make up 'Child of the Universe', Delta believes are several of the best songs she has ever written, tracks such as the heart-wrenching ballads “I’m Not Ready” and new single “Wish You Were Here” [about the death of one of her closest friends], or the etherealness of “Touch” and, naturally, the spirituality of the title track, “Child Of The Universe”.

“All the lyrics signify what I feel about the world right now,” she says. “For the gravity of what I went through in these past couple of years, you have to listen to the rest of the record. It’s all in there.”

“The songs feel so great and lyrically are pushing forward and expressing things I’ve never said before in songs,” she adds. “I was travelling a lot, changing my life up – maybe it was the freedom of turning into myself again.”

“My heart and soul is barefooted, at a piano,” says Delta. “And that’s what it is, while playing with the production. It has that essence of being a woman who travels around the world, discovering different theories about how life works and putting it into song.

The beginning of 'Child of the Universe' dates as far back as 2009, soon after Delta wrapped duties on her “Believe Again” national Australian tour. Delta had a strong vision for the album from the outset and the music quickly began taking shape as she worked with friends, collaborators and celebrated songwriters/producers in their own right: Gary Clark, Vince Pizzinga and John Shanks.

Then one thing after another kept delaying the process. She relocated her life to Los Angeles; Andrea Bocelli invited her to tour the world; Michael Bolton heard a demo version of “I’m Not Ready” and asked to use it as the lead single on his own album, as a duet with Delta. And most recently, the singer was invited to take on the role of coach on the record-breaking The Voice Australia, an experience she found in equal parts challenging and so richly inspiring. “Knocked Out”, the last song to be recorded for the new album, was directly inspired by Delta’s time on the show.

The bulk of the recording of 'Child of the Universe' took place in two of the most iconic music studios in the world – the famed Capitol and Henson Studios, both in Hollywood – with additional sessions taking place at Delta and Gary Clark’s respective home studios. One track, “I Lost All Love For You”, was captured in London with renowned Swedish producer Martin Terefe, while “Knocked Out” was brought to life in Sony Studios in Sydney, the very same room where Delta recorded “Born To Try” a decade earlier.

It was during a more recent trip back home to Sydney that Delta was inspired to add a whole new dimension to 'Child of the Universe'  She asked her live touring band to join her in 301 Studios and, in a frenetic three-day session, Delta rearranged, reinterpreted, produced and rerecorded a dozen of these new songs how she originally wrote them in their acoustic form. These 12 acoustic readings of the songs, which present a completely different perspective to the fully produced versions of the compositions, will be presented as bonus tracks on 'Child of the Universe'

With three number one albums already to her credit, countless number one and top 10 singles, multi-ARIA Awards, so many classic songs and over 6 million units sold worldwide – more than any other Australian artist in the past decade – Delta Goodrem’s phenomenal career so far speaks for itself.

AND: you can win one of FIVE 'Child of the Universe' albums right here.

1. 'Like' the Josie's Juice Facebook page [on top right hand side of this page].
2. Share this link on your Facebook wall
3. Tell us why you'd love to win this album, in comments section below, or on email.
4. Email your address to josiegags@optusnet.com.au in case you are a winner, so you are easily contactable.

Here is the tracklisting :