In news just in, Kate Middleton is pregnant, as just confirmed by the Palace:
"Their Royal Highnesses The Duke and Duchess of Cambridge are very pleased to announce that The Duchess of Cambridge is expecting a baby," the office said in a statement.
"The Queen, The Duke of Edinburgh, The Prince of Wales, The Duchess of Cornwall and Prince Harry and members of both families are delighted with the news."
The statement also said Catherine was in the King Edward VII Hospital in Central London suffering from very acute morning sickness. She is likely to remain there for several days.
It said her condition required supplementary hydration and nutrients. While there was no detail about when the baby was due, with the statement stating the pregnancy was in its early stages, Kate is believed to be less than 12 weeks pregnant.
"I'm delighted by the news that the Duke and Duchess of Cambridge are expecting a baby," Prime Minister David Cameron said on his Twitter account. "They will make wonderful parents."
Fabulous news. A gazillion magazine covers to ensue. 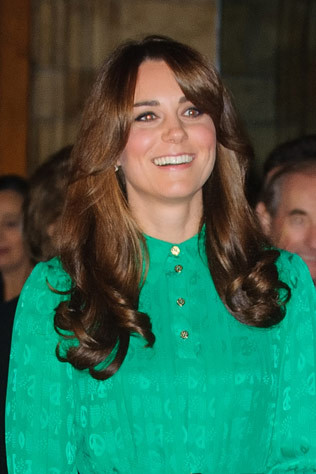 Email ThisBlogThis!Share to TwitterShare to FacebookShare to Pinterest
Labels: Babies, Family, News, Parenting, This Just In