Sky Zone. The first time I saw this concept was on 'The Real Housewives of The OC'. Yes, I know. A reality TV addict right there.

So when I was approached to come trial it next week with the kiddies, I jumped (ha!) at the chance. More on that next week!

This is the first Sky Zone in the Southern Hemisphere, and it's set to launch in Sydney.

The cool thing is, Sky Zone is offering Josie's Juice readers the chance to come trial it! With your family. For FREE!

A little more about Sky Zone:

Sky Zone is an indoor trampoline park and it will launch on May 1, 2014.

At over 3000m squared, Sky Zone Alexandria (Sydney) will be the largest trampoline park in Australia.

Located in Alexandria, Sky Zone will have 170 connected trampolines and will be a fabbo place for children's parties, dodgeball, fitness classes and more. 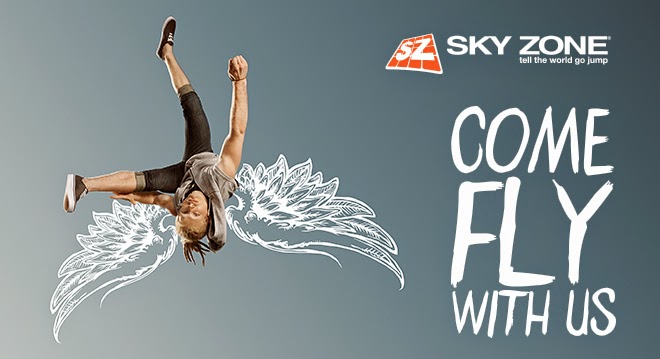 Sky Zone is the founder of trampoline parks worldwide, first launching in 2004 in the United States.

“Aussies are gutsy, love the extreme and aren’t afraid to have fun, so to partner with the world’s industry leader in trampoline parks and bring Sky Zone to Australia was an easy choice,” said Michael Schreiber, CEO of Sky Zone Australia and Strike Entertainment.

Boasting 180 interconnected trampoline-wall courts, the world’s premier trampoline park will incorporate different zones throughout the centre including the ‘Stratosphere’ where people can free jump, ‘The Pit’ which will be the ideal flip and fall destination and ‘The Wall’, for the serious jumper and adrenalin seeker.

“Sky Zone is already the number one, biggest and best trampoline park worldwide. The launch of Sky Zone in Australia will shake up trampoline parks as we know them and will add something special for the people of Sydney,” said Mr Schreiber. “It’s about the laughter, freedom and fun you can only experience when you give yourself over to the action.”

Sky Zone Alexandria will have the ‘Altitude Canteen’ serving a health focused food and drinks, complete with a viewing platform where people can watch the action.

“From teenage skaters who like nothing more than to flip out on their skateboards, children and families celebrating birthdays, fitness enthusiasts who want to burn calories by trampolining, dodgeball fanatics up for the challenge and adults ready to unleash their inner child, Sky Zone gives everybody a reason to go jump. While fun is important at Sky Zone, so is safety. Sky Zone Australia has followed in the footsteps of the U.S. parent company and is setting the benchmark high for Australian industry safety standards. We have a strong stance when it comes to safety and we are working tirelessly to ensure Sky Zone is a safe place where people can have fun,” said Mr Schreiber.

And so, the reader giveaway!

The doors to Sky Zone open next week, on Thursday May 1, and Josie's Juice readers can come in and attend a one hour long session the day before they officially open to the public.

Held on Wednesday April 30, this event will allow you to be the first to come in, test out all of the facilities and have fun!

This one hour session will be between 12pm and 1pm on Wednesday April 30, and Sky Zone Australia and Josie's Juice are offering 15 family passes (four people for each pass) to Josie's Juice readers.

Each family pass is valued at $160 and includes bouncing, entertainment and the Peter's Ice Cream Mash Up Station. YUM. And FUN! Total prize value is $2400.

All 15 winners will be announced next week, on Tuesday April 29.

*Competition closes on Tuesday April 29, 2014 and is open to Sydney residents only.

Here is a US video on what it all looks like: