At what point does reality TV give far, far too much information (TMI).

I am thinking… this:

This new show with Tori Spelling, 40, and her husband Dean McDermott, 47, called 'True Tori' is set to air on the US channel Lifetime on (US time) on Tuesday April 23 at 10pm (check back here for Australian screen date), and that clip is already getting many talking on social media. 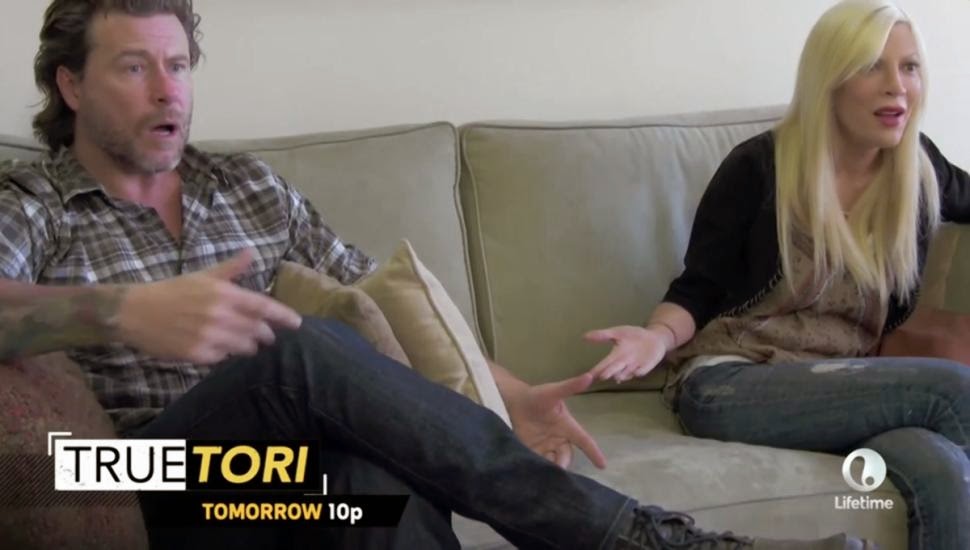 Says Dean in the show: "My worst nightmare is what I did. Absolutely, I cheated on my wife," he tells the therapist as his wife looks on.

"Or that you got caught?" Tori interrupts. After a long pause, he admits, "I don't know."

Backstory: in late December 2013, American mag 'Us Weekly' broke the story that the father of four had an affair with 28 year old Emily Goodhand. In the April 28 cover story of the mag, Toti opened up to Us Weekly about her own traumatic experience with discovering the affair.

"He was very nervous - I saw it in his face," she told Us of confronting her husband of 8 years. "He said that they had kissed but that was it. I knew in that moment the worst had happened."

In 'True Tori', Dean talks about his disappointment surrounding the couple's sex life.

"We had sex once every two weeks. It wasn't fantastic," he told the therapist.

"I can never give him enough sex!" Spelling replied. "He's never going to be happy with just me."

Dean, who entered treatment for an undisclosed addiction following the news of his affair, says there were no emotional ties to his infidelity.

"I wasn't attracted to her. It was just like a warm body," he said of Emily. "Sex was an escape, just like drugs and alcohol."

Would you tune into the show? Is it too much to see, especially if you've been in her/his position?
Posted by Josie at 08:42