"300 sandwiches away from an engagement ring." - Stephanie Smith's experiment.

Can you hear that?

It's the sound of people all over the world, utterly aghast.

This woman kicked off an experiment, which can be described as fun, delicious... and a tad 'Stepford Wife' perhaps?

The woman - Stephanie Smith - is 300 sandwiches away from an engagement ring.

Here is Stephanie and her boyfriend Eric: 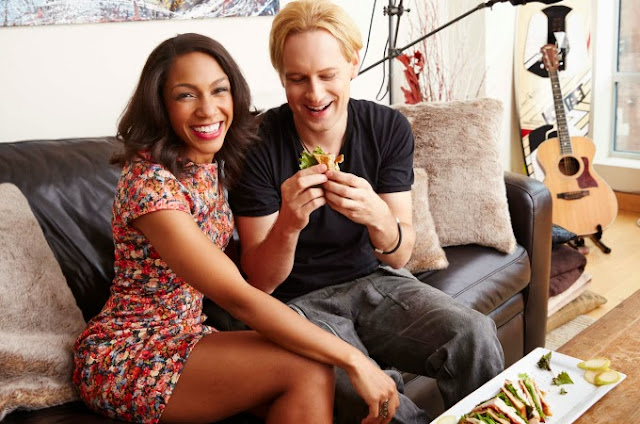 Here is an excerpt from the story:


Since last June, a young woman has attracted attention from culinary world icons such as Emeril Lagasse, Michael White and Ken Friedman with 300sandwiches.com, a beautifully photographed blog that documents her quest to woo her boyfriend with bread-and-meat creations. We now reveal that the woman behind the blog is our very own Page Six senior reporter, STEPHANIE SMITH. Here, she tells her story — and shares some recipes.
My boyfriend, Eric, is the gourmet cook in our relationship, but he’d always want me to make him a sandwich.
Each morning, he would ask, “Honey, how long you have been awake?”
“About 15 minutes,” I’d reply.
“You’ve been up for 15 minutes and you haven’t made me a sandwich?”
To him, sandwiches are like kisses or hugs. Or sex. “Sandwiches are love,” he says. “Especially when you make them. You can’t get a sandwich with love from the deli.”
One lazy summer afternoon just over a year ago, I finally gave in. I assembled turkey and Swiss on toasted wheat bread. I spread Dijon mustard generously on both bread slices, and I made sure the lettuce was perfectly in line with the neatly stacked turkey slices.
Eric devoured the sandwich as if it were a five-star meal, diving in with large, eager bites. “Babes, this is delicious!” he exclaimed.
As he finished that last bite, he made an unexpected declaration of how much he loved me and that sandwich: “Honey, you’re 300 sandwiches away from an engagement ring!”

Look. Nobody should bribe anyone with anything for an engagement ring, ever.

This sounds like something that started exactly as described above, in jest. Her editor said "Write a story!" and it snowballed from there. He's probs going to propose anyway, and they've talked about it, and she knows it. And this is a fun way to get there, and they're having a chuckle along the way. Meanwhile, it's all "Oh my GAWD, dump him girl!" and, "God, what a pig", etc, etc.

Me: I LOVE cooking for my husband. Love seeing him hoe into a fresh batch of pasta which I know is so good when he eats it straight from the pot, and mops up the tomato sauce with bread. This gives me great pleasure. We are a bit traditional: I do all the cooking, but yeah, he helps a LOT with the cleaning. Not "helps", actually. Does it because he loves it. Yeah, I know. Weird.

Does it annoy me sometimes when I have to cook and don't feel like it? Hell yes.

What do you think of the above? Comment below!

Read the rest of the 'New York Post' article here.

To see the recipes of the sambos she's cooked and assembled so far (damn delicious, and some, rather intricate and labour-intensive!), click here.
Posted by Josie at 11:16