Nicole Lenoir-Jourdan is an incredibly diverse writer. I have known Nicole for many years as a publicist extraordinaire. I had no idea she was also such a talented writer.

Nicole has written in a number of genres, and her latest work, 'Hardly Branson: Seven Days in Space with a Martini' is a comedic science fiction in the genre of Jasper Fforde, Terry Pratchett and her favourite writer, the late Douglas Adams, whom Nicole was privileged to interview.

In fact, Nicole's most prized possession is her copy of the Douglas Adams' 'Ultimate Hitchhikers Guide to the Galaxy' which bear the words: "To Nicole, whose questions were much more clever than my answers! With best wishes, Douglas Adams", after she interviewed him for Singapore's Peak Magazine, and Oyster Magazine, at the Intercontinental Hotel Sydney.

Here is the gorgeous and talented Nicole: 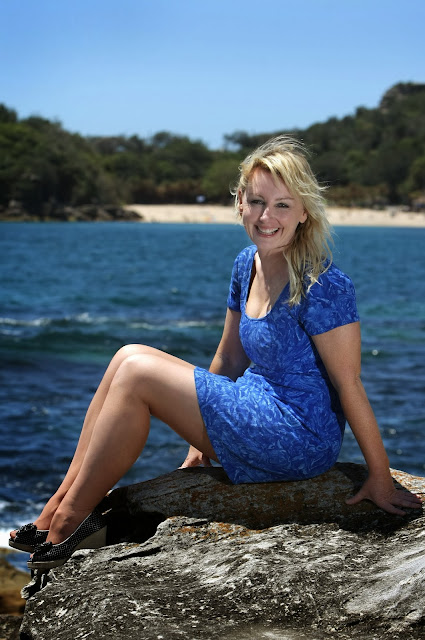 What was the catalyst for you to write this book?

Nicole: I have always loved science fiction comedy and having worked in the travel industry for around twenty years, I thought the timing perfect to do this story as there are so many inroads being made into Space Tourism.

Have you always been interested in this genre? Tell me why!

Nicole: Yes I loved Douglas Adams’ who wrote the five book trilogy of 'The Hitchhikers Guide to the Galaxy.' I even had the opportunity to interview him in Sydney and he signed my copy of his book with the words “To Nicole whose questions were more clever than my answers!” Something I will truly treasure, especially as he is no longer alive. 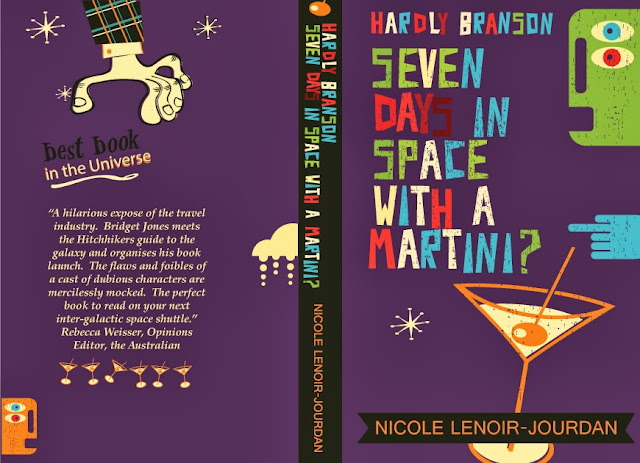 Give us a rundown on the plotline and central characters of the book?

Nicole: “A hilarious expose of the travel industry. Bridget Jones meets the Hitchhikers guide to the galaxy and organises his book launch. The flaws and foibles of a cast of dubious characters are mercilessly mocked. The perfect book to read on your next inter-galactic space shuttle.” So said Rebecca Weisser from 'The Australian.'

The Galaxy is open for business. Who else could have tapped into this market but Earthling, Dick Brampton? Dick Brampton is starting daily flights to Froog. He funded this venture the sale of the Earth to the President of the Galaxy who had no view from his bath tub. Bathing is of the utmost importance to Galactians, so are manufactured views.

The President’s right hand alien, his interior decorator, Rod, was on a mission to create the perfect view. The Earth had just the right colour scheme. Rod travelled to Earth and after seeing a publicity launch with Brampton as King of the World, met with him to negotiate the terms to secure this view.

Doug Dahl an unassuming surfer wanted to find his perfect soul mate. When Brampton launched his flights to the galaxy, Doug decided space was the place for singles. Unfortunately the launch flight was not particularly successful.

Doug landed in a bathtub of a ten foot large green pimply alien Zurm. From the Zurm’s bath to the planet Froog, Doug somehow voyages around the planet  in a variety of styles from depressing public transport, blue bubble taxis with hyper drives and hot pink trion brand spaceships. The search is on for his soul mate. He has no idea that it just happens to be one of the types he is pursued by.

Doug is also interwoven into a conspiracy for Dick Brampton to become president of the Galaxy. One of the most powerful groups in the galaxy, the black BMY driving real estate agents who are after Brampton as he cut the Earth deal before they did highjack the president’s view and demand payment. Brampton fakes his death in order to summon support for the great election.

Who would book most appeal to, and what do you hope for the book?

Nicole: The book is written for a young adult fiction but I hope that in the same way that 'Harry Potter' and 'The Hitchhikers Guide to the Galaxy' have universal appeal over all demographics, that this will have people in their 40s chuckling, as well as the teenagers.

You can buy the book right here on Amazon for Kindle.
Posted by Josie at 23:42