This just in: the first look at the L’Oréal Paris campaign which sees Australian face Megan Gale join their fight against ovarian cancer. This major national outdoor campaign will kick off on Monday. Here is a sneak preview: 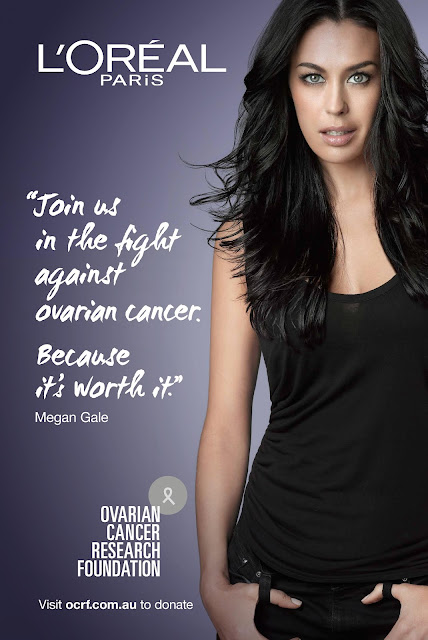 With L’Oréal Paris, Megan has been the face of several major product campaigns, represented the brand at events internationally, and has now joined the brand's ongoing battle against ovarian cancer.

"Because You’re Worth It" is the famous L’Oréal Paris signature phrase, and this campaign is in line with continuing the brand's passionate about supporting and empowering women everywhere. Indeed, L’Oréal Paris has been a proud partner of the Ovarian Cancer Research Foundation (OCRF) since 2009.

While awareness of the disease has increased it still remains a ruthless, silent killer without an early detection program. Every year approximately 1,200 Australian women are diagnosed with ovarian cancer and, in Australia, one woman dies of the disease every 10 hours. I won't lie - this disease terrifies me, and each time I hear it discussed on TV I am glued, wanting to glean as much information about it as possible.

"The OCRF’s vital research into ovarian cancer is an amazing cause that both I and L’Oréal Paris strongly believe in… it’s a devastating disease,” says Megan. “For L’Oréal Paris, their partnership with the OCRF is very special and I'm honoured to be involved with their fight in any way I can,” Megan continued.

Megan and L’Oréal Paris will be celebrating the brand’s partnership with the OCRF throughout September. Central to this, Megan will be the face of a major national outdoor campaign (above) created to drive awareness and vital research donations for ovarian cancer.

Megan Gale also joins Australian ovarian cancer survivors in an inspiring feature in the September issue of the 'Australian Women’s Weekly', and will co-host some of the magazine’s '80th Birthday High Tea' events with proceeds going to the cause.

In a clever, fun idea, L’Oréal Paris is asking all Australians to join the fight by hosting their own High Tea events throughout September to raise much-needed research donations. I am so there. What a fab excuse to hold a girlie shindig?

For further information or to donate please visit www.ocrf.com.au.

Could you please share this with everyone on all your social media networks? It is meaningful and urgent and important, for women and men and families. Everyone.
Posted by Josie at 12:19