Nigella Lawson has just appeared on US TV screens, in her first appearance since the recent fraud trial which dragged her personal life through the mud, calling the whole thing "mortifying".


The trial was supposed to centre on Nigella and ex-husband Charles Saatchi’s former personal assistants Elisabetta and Francesca Grillo allegedly fraudulently spending the family money on their work credit cards (in the end, they were aquitted), but it quickly became about the breakdown of the Saatchi/Lawson marriage.
Appearing on 'Good Morning America' in her first live television appearance since the trial, Nigella spoke about the toll events had taken on her. "My only desire had been to protect my children as much as possible, which alas, I couldn’t always do."


"To be honest to have not only your private life, but distortions of your private life put on display is mortifying," she said, "but you know, there are people going through an awful lot worse and to dwell on any of it would be self pity and I don’t like to do any of that."
She added: "It’s one of the niceties of the English legal system that you’re not allowed any counsel if you’re a witness, but maybe that will change. Maybe that’s good."
See the whole clip here:

One of the most memorable images from the trial was... this. A defiant, impeccably groomed Nigella walking confidently into the trial. It said: a big 'eff you' to her detractors. Brilliant. 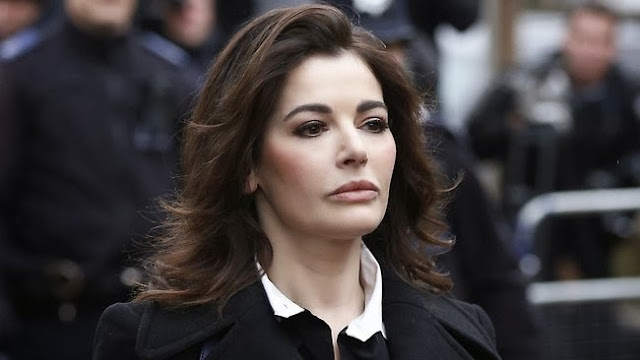 And here is Nigella as she appeared on GMA: 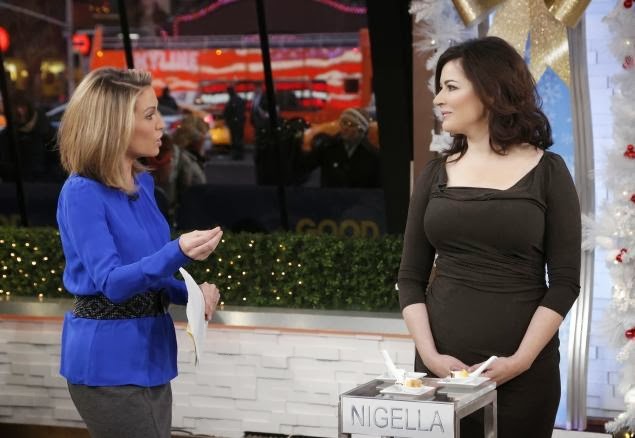 Email ThisBlogThis!Share to TwitterShare to FacebookShare to Pinterest
Labels: Americana, Controversy, Food, This Just In, UK