Kaley Cuoco - the actress from 'The Big Bang Theory' - has just married in a New Year's Eve wedding in Southern California, as confirmed by her rep, in this piece.

She posted this photo on her Instagram page - wearing a pink wedding dress (more below)! 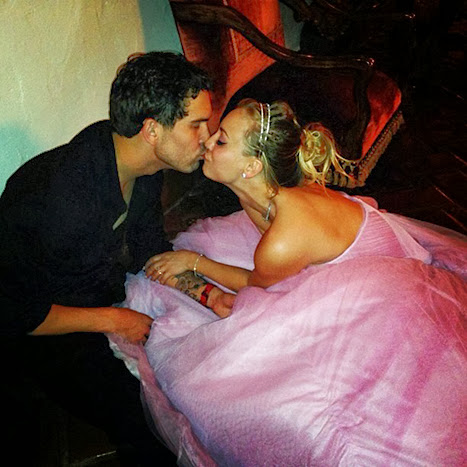 The actress, 27, and her tennis pro beau Ryan Sweeting, 26, said "I do" at the Hummingbird Nest Ranch in Cali.

Kaley greeted guests in a red dress, an insider tells Us. Before the nuptials began around 10 p.m., Cuoco changed into a petal pink Vera Wang gown.

"Yep :) #thesweetings @ryansweething," Cuoco wrote in the early hours via Instagram.
Alongside the caption was this photo above. The strapless tulle Wang ball gown had a sweetheart neckline and detailed bodice with hand appliqué Chantilly lace accents.
Here is another photo Kaley has just posted on her Instagram: 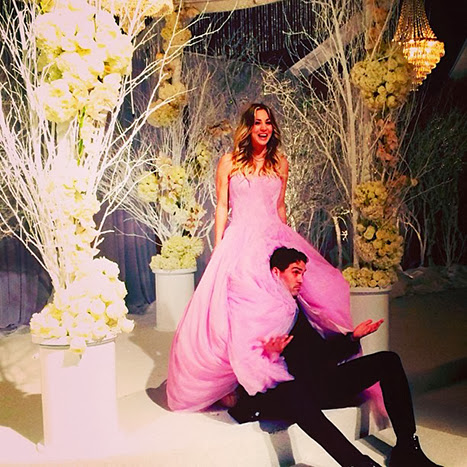 Famous pals to attend the ceremony included her 'Big Bang' co-star (and ex-boyfriend) Johnny Galecki (Kaley and Johnny secretly dated for two years, and it was only after their split that Kaley revealed their past romance in September 2010.)
Kaley got engaged in September 2013, just three months after she and Sweeting started dating. "She knows Ryan is the one," a source told Us magazine at the time. "When you know, you know." Added another pal: "She's never felt this way. She knows this is it."
Kaley told 'Entertainment Tonight' she felt an intense connection with Sweeting from the very beginning of their relationship. "From day one, I just knew immediately and it's been magic. We have all the same family friends. We grew up with the same people, we just never met," she explained a few days after their engagement. "So I kind of feel that I've known him my whole life."
Posted by Josie at 09:10