New figures from the Cancer Institute NSW revealed that despite only one in ten (12.7%) 18- 24 year olds in NSW trying to tan the previous weekend, almost double that number got burned (22.2%).

Despite a drop in the number of Aussies wanting a tan in recent years, the Cancer Institute NSW fears complacency towards sun protection is becoming a big risk factor.

Only 36 per cent of young people surveyed regularly apply sunscreen before going out, while over 40 per cent say they simply forget to protect themselves from the sun. A quarter (26%) say they can’t be bothered, and one in five (22%) say they don’t have time. Some still see sun protection as unfashionable, with 15 per cent saying this is their reason for not protecting their skin.

Blanche Marchant, Manager of Skin Cancer Prevention at the Cancer Institute NSW, says that these figures should be used as a catalyst for change.

“If we can inspire a generation to stop skin cancers by taking simple preventative actions, we can stop 95 per cent of melanomas. But looking at current behaviours of our most susceptible generation, we need a game-changer to spark action and make ending skin cancer a priority.”

In line with this, the Cancer Institute NSW has launched the Pretty Shady Campaign to address young people’s complacency about skin cancer by addressing sun protection in a fresh new way.

With the aim of empowering young Australians to be the generation that stops skin cancer, one summer at a time, Pretty Shady features famous faces including actress and model Isabelle Cornish, stuntman Robbie Maddison and graphic artist Mitch Revs.

Here are the beautiful campaign shots (all by Jarrad Seng): 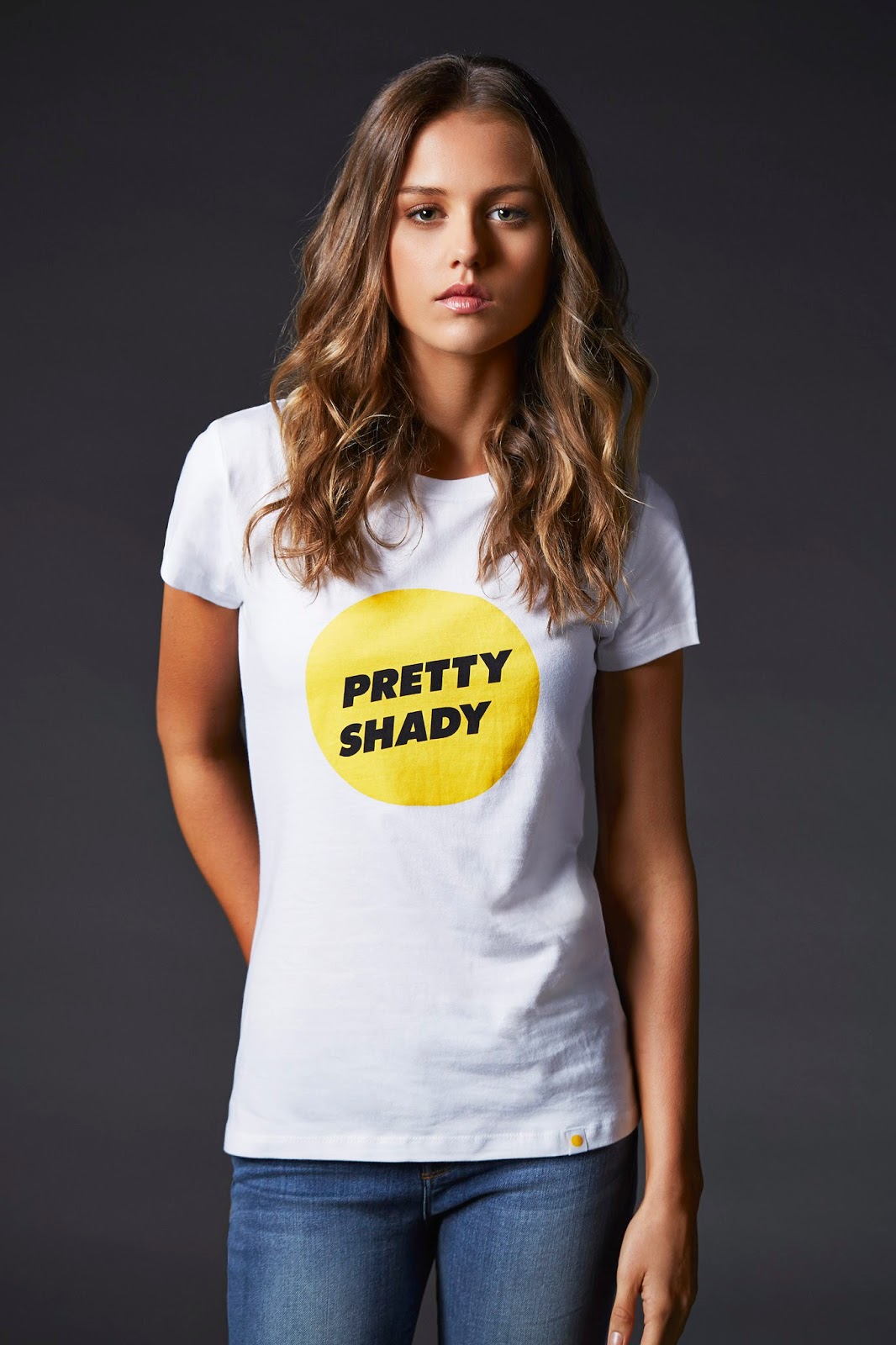 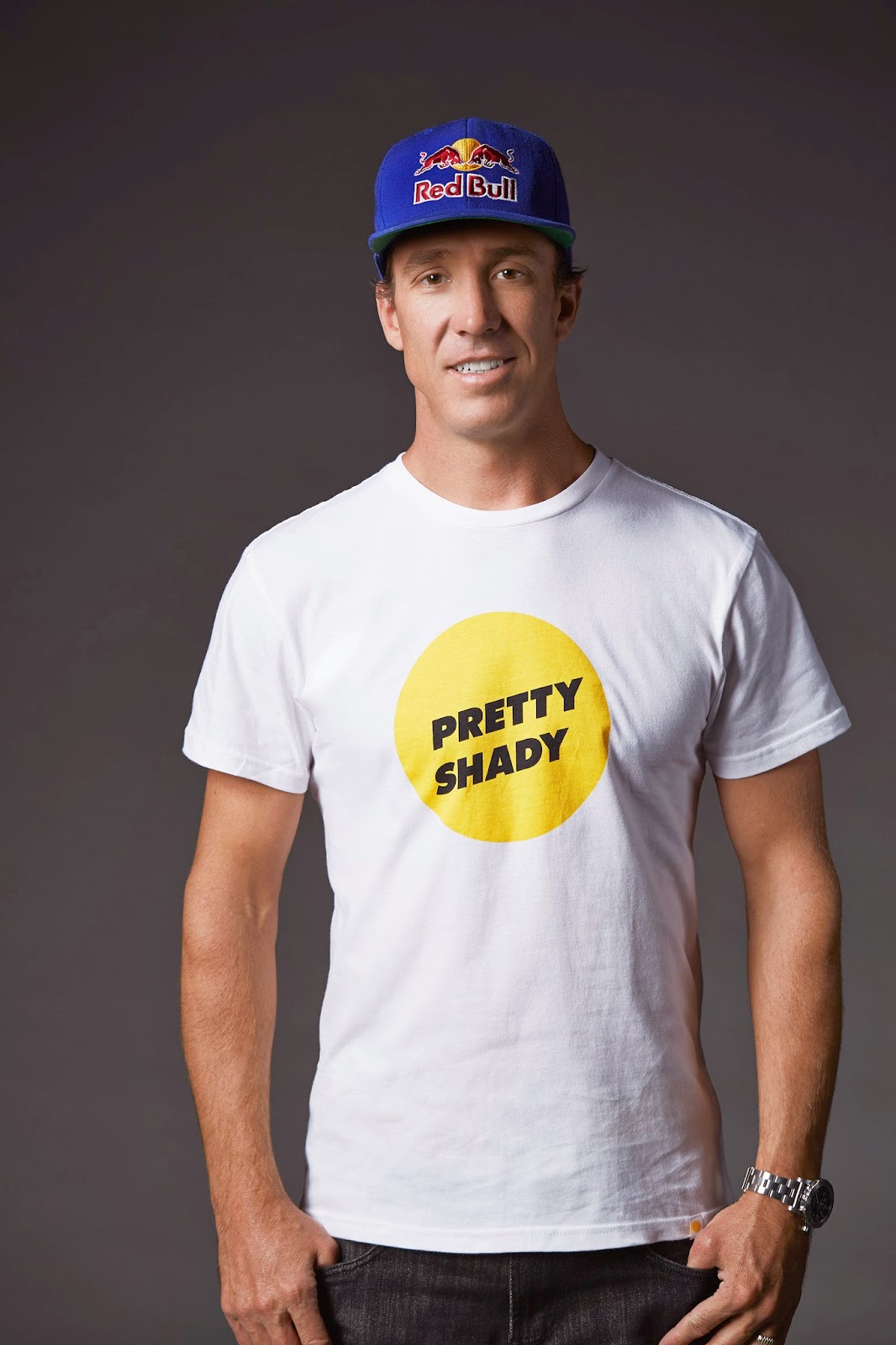 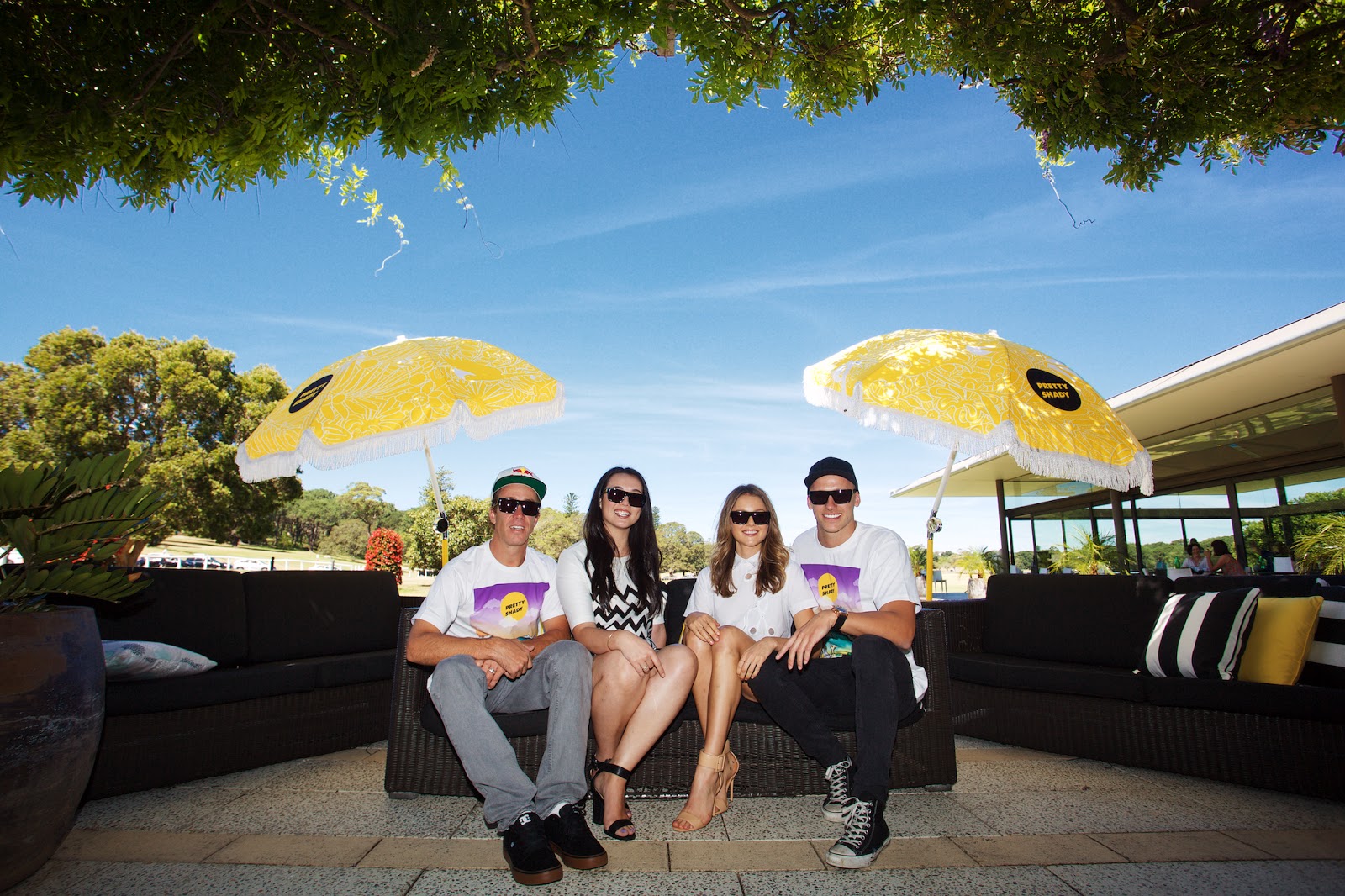 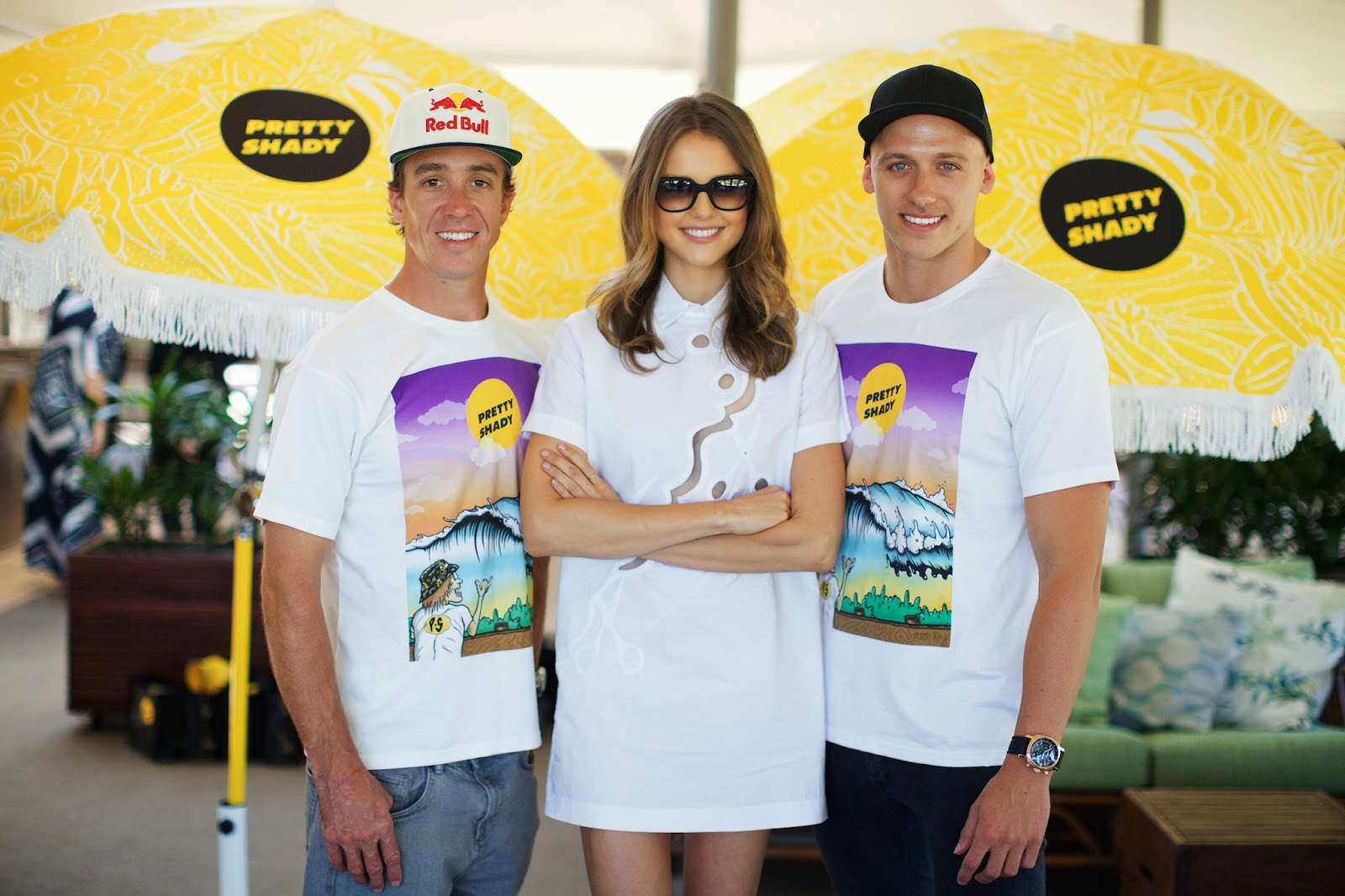 “We know that by taking five simple steps – seeking shade, wearing a hat, sunnies and protective clothing and applying and reapplying sunscreen, we can stop skin cancer,” says Marchant. “Pretty Shady is about letting this generation know that they can stop skin cancer and giving them to tools to make skin protection a part of their everyday lifestyles," adds Blanche.

A range of stylish ‘money can’t buy’ products are on offer, and the support of some of Australia’s top bloggers (above), is also proving that sun protection and summer fashion can go hand in hand.

We are Pretty Shady: ambassador bios -

Isabelle Cornish is a fashion icon, healthy living guru and household name. Acting as an inspiration to young girls all over the world, she knows that protecting your skin does not mean sacrificing your style. Wearing a trendy hat and a fab pair of shades when she is outdoors means Isabelle is picture ready on the red carpet with flawless and youthful skin.

“Advancements in cosmetics have seen sun protection and beauty cosmetics collide. All my moisturisers are SPF30+ and I wear them all year round. I always have some in my handbag ready to put on throughout the day. I think it’s really important because you’re getting the sun protection and it’s on your skin wherever you go in the day.”

Robbie Maddison is one of the most fearless and admired FMX riders in the world. He’s held world records for longest distance jumped on a motorcycle, casually back flipped over the opened Tower Bridge in London and has a swath of X Games medals and X Fighters trophies to his name. Robbie knows how to bend the laws of physics, but also how to take care of his body so he can continue living the dream. Sunscreen, sunglasses and a hat are as essential in his kit as his bike.

“Through my time of travelling the world the last 10 years, I’ve noticed how severe the Australian sun really is. Whether at the beach or riding outdoors, if you start protecting your skin, you can stop 95-99% of skin cancers. It’s pretty simple.”

“Pretty Shady is a great message. It’s a serious message but it’s something that everyone needs to be aware of. It’s about being smart and we now have that awareness. The sun is damaging to us, so being onto it and having the initiative to protect yourself. It’s just a smart thing.”

Mitch Revs is a surf and skate graphic artist who grew up in the coastal city of Newcastle. Although Mitch spends his time bringing a little more colour up and down the coast while working on creative murals and repping the surf culture, he is vigilant about doing what he can to protect his skin. A tee, hat, sunglasses and sunscreen are Mitch’s staples for keeping ‘shady’ while creating outdoor art.

“It hurts to be sunburnt. Nothing reminds you of how important it is to take care of your skin than sunburn. It’s not cool. The surfers out there wearing sunscreen and zinc, they’re the ones out there enjoying the swell for as long as it lasts.”

“When I’m out surfing I’m always wearing sunscreen, plus I hate the cold so I’ve got a wetsuit on more often than not. But outside the surf, I’ll always have a hat, tee and sunnies on and make sure I keep in the shade. I’ve seen what the sun can do to you, and I don’t want that to happen to me or anyone I know.”

Veronica Manock was young and healthy when she discovered just another mole on her leg. At only 20 years old, Veronica was diagnosed with melanoma. Growing up in Tasmania and later as a teenager in the country town of Bathurst, she now campaigns nationwide to raise awareness of the importance of sun protection no matter where you live or what you look like. Veronica knows from experience you can’t be too careful when it comes to protecting your skin and she wants to prevent others from going through what she went through.

“Pretty Shady to me is about not wanting one of my friends, my family, or anyone else to have to go through being diagnosed with melanoma, or any type of skin cancer. This is serious, and we need to know about how to prevent it.”

Get on it, folks. A fabulous campaign with a truly important message, delivered in a way that this generation is receptive to.
Posted by Josie at 12:27