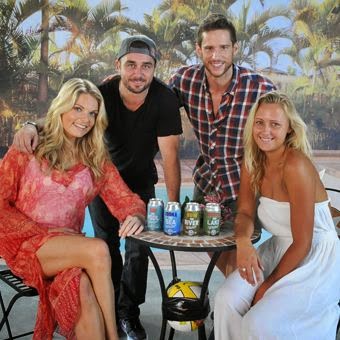 Australians are known around the world for our love of the water so with the temperature rising and the festive season in full swing its time to remind our young adults that alcohol and swimming form a dangerous cocktail. And in true ‘down under style’ Royal Life Saving NSW have enlisted the help of four influential media personalities to participate in the ”Sinkers” Campaign created by 303Lowe, aimed at using humour to raise awareness and reduce alcohol related drownings in people aged 15-29.

The “Sinkers” campaign and fronted by Channel 9 Journalist Erin Molan, Pro Surfer Ellie Jean Coffey, Pro Skateboarder and TV Presenter Corbin Harris and Actor Dan Ewing, is set to inspire Gen Y to let people know alcohol and water do not mix. Alcohol is a factor in 41% of drowning deaths in people aged 15-29 and can happen anywhere and at any time: Swimming; surfing; boating; fishing; sailing; camping by the river; even in the backyard pool. “Sinkers” is tackling the issue head on using social media to talk to young Australians.

Royal Life Saving understand most people enjoy a drink to unwind and enjoy themselves however alcohol has been shown to significantly increase the risk of drowning. Therefore, getting the message out this summer is vitally important.

“Each year we lose young Australians to drowning because they drink alcohol and then enter the water. The two don’t mix! Alcohol consumption leads to a lack of coordination, greater risk taking behaviour, impaired reaction time and impaired judgment. This summer we want everyone to enjoy our pools, beaches, rivers and lakes but we need to ensure that alcohol consumption is left to when aquatic activities have concluded. The Sinkers campaign is utilising a range of social media strategies together with high profile ambassadors to raise awareness amongst the 15-29 year olds who are traditional hard to reach so they know the dangers of mixing alcohol with aquatic activity.” Commented Michael Ilinsky from Royal Life Saving

Royal Life Saving and their “Sinkers” Ambassadors are urging people to take the pledge and think twice before mixing alcohol and swimming. #DontDrinkAndSink is the official hashtag to link and follow. More on the people fronting the campaign, below:

Erin Molan
'We are told early on to combine drinking alcohol with water - have a glass of wine then a glass of water to limit your alcoholic intake... but when that combination with water involves a beach, a pool, a river or a lake it can be deadly... as a journalist I've seen first hand how devastating the consequences can be with just under one third of all drowning deaths involving alcohol... it is absolutely terrifying... Royal Life Saving’s campaign is crucially important for a nation that loves water... and a good time... awareness is the key here and I didn't have to be asked twice to get involved!'

Ellie Jean Coffey
“Having grown up at the beach as a professional surfer I have seen first hand how important it is to respect the water. As a country, we love the outdoors, love to have a BBQ and have a drink. What Sinkers is all about is to recognise that when you have been drinking you are not at your best and so swimming can put you at risk. Water and alcohol do not mix and having younger siblings myself I want them to understand why this is so important."

Corbin Harris
"Water sports and life by the water is such a huge part of growing up in Australia - it certainly was for me, and I think sometimes young people take for granted how dangerous the surf can be when you're unaware. Mixing alcohol with any activity increases the risk especially when there is water involved it can be seriously disastrous. There is no reason why you can't have fun and stay smart by the water. The Sinkers campaign is a warning with an important message but doing it in a fun way so I want to encourage everyone to share the videos with their social networks and get involved. "

Dan Ewing
"Too many adolescents are making the wrong decisions and mixing alcohol & swimming. Sadly this often results in serious injury and death. I have a 16 year old brother so this campaign is very close to my heart with a staggering 77% of annually drownings being male. I truly believe the SINKERS campaign is a great fresh approach to educating our youth with a little Aussie humour. I applaud Royal Life Saving and the amazing team involved for conceiving such a bold concept that I know will not only reach young Aussies but also make them think before mixing the deadly cocktail of alcohol and swimming"

And here, the videos: