The much-talked about TV show, starting on Foxtel on February 11 2015, at 9.30pm and also screens on Network Ten the following night.

This is your first exclusive first look at the 'Goggleboxers':

And more on the cast, with their official bios below (with their fabulous profile photos):

Produced by Shine Australia, executive producer, David McDonald said: “The most important thing about the cast was finding a diverse range of people who offered us a variety of opinions and points of view.

“We’ve definitely found a group of people who deliver that, and a whole lot more.”

And here they are:

Vivacious friends and housemates, Angie and Yvie, live in Sydney’s inner west. Their home is vibrant and noisy thanks to the small circus of permanent and foster dogs they have living with them at any given time. The girls love grabbing some take-away, a cheeky wine or a Frangelico on ice and settling in for a bit of telly, critiquing shows and celebrities alike.


Best mates and larrikins with a thirst for life and beer, Adam and Symon, met on a university pub crawl. Both Physiotherapy students, they have just returned from volunteering overseas. Although they are less inclined to watch the nightly current affairs shows, they are always up-to-speed on important topics like the latest gossip from Kim and Kanye.

Bubbly Anastasia and Faye, both born in Australia to Greek parents, have more personality in their little fingers than most people have in their entire body. When the two draw breath from talking about the latest celebrity gossip or yelling at the television in multiple languages, they are ready to relax in front of the box with a Scotch or Baileys, chips ‘n’ dips, chocolate and ice cream.


Meet the Dalton Family – Matt, Kate, and their two daughters, Holly and Millie. The girls love watching teen flicks and reality shows together, while Matt and his daughters share a love of sport, especially AFL. With varying television tastes between them, there’s always a disagreement over the girls’ constant chatter and the TV remote. You will always find Kate with a cup of tea, the girls with their mobile phones, and Matt just trying to get a word in edgeways.


In the heart of Sydney’s west live the fun-loving Delpechitra Family – dad Patrick, mum Tracey, eldest son Wendel, daughter Vestal and son Ethan. Patrick and Tracey moved from Sri Lanka to Australia 25 years ago and haven’t looked back since. This is a tightknit family with a big sense of humour that love watching television together and chewing the fat over the latest reality television scandal and, of course, the cricket.

The Jackson Family are a loud, happy and sports-crazy family made up of mum Stacey, dad Grant and their six children ranging in age from 17 to two-and-a-half-years-old – Corey, Britney, Jesse, Chase, Kane and Nate. The doors to the Jackson home are always open and their lounge room is often full of family and friends, especially when there’s a Tigers game on.

The quirky, fun, opinionated and intelligent Kidd Family – dad Stuart, mum Janet, son Michael and his wife Elena, and youngest son Roger – are all avid TV fans, often settling in front of the box to catch up; indulge in some of dad’s love trivia and the boys love of all-things Star Wars; and engage in some fun and heated debates. There’s never a dull moment in the Kidd lounge room when the television is on.

Lee and Keith live in Melbourne’s outer-northern suburbs with their two adult children. Now the kids are all grown up, it’s time to turn the focus back on them, which means saving up to celebrate 30 years of marriage in Las Vegas. After dinner they will grab a cup of tea and head to the lounge to snuggle – much to their daughter’s embarrassment – and watch the box, never missing their favourite quiz shows, the nightly news and current affairs.


Indigenous art dealers Mick and Di have been happily married for nearly 50 years now and reckon they know each other inside out. They opened their own art gallery and dealership 30 years ago and the business is still going strong. With a love of art, food and wine, watching the news and testing their knowledge on quiz shows, they are sure to bring a keen cultural eye to the week’s big moments in television.

Wayne and Tom met at a country dance on the dance floor while Kylie Minogue’s Love at First Sight was playing. Now 15 years on, they have raised three children together and are still as madly in love as the day they first met. Wayne's secret addiction to watching anything “Zombie” related and re-runs of British Sci-Fi and Comedy shows is no match for Tom's lifelong obsession with Kylie Minogue – he’s even got a Kylie tattoo, which she signed and tweeted a picture of. The boys and their dog, Satie, share the lounge together every night, always with a drink in hand. 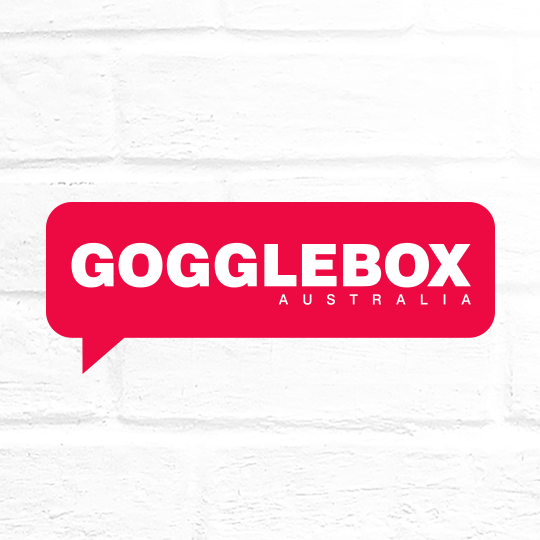 The English version of Gogglebox has been screening in the UK for several seasons now, and recently, they had a celebrity special version of it. Starring Kate Moss, Naomi Campbell and Noel Gallagher!

Which means… Australia will get a celebrity version too! (Please!) 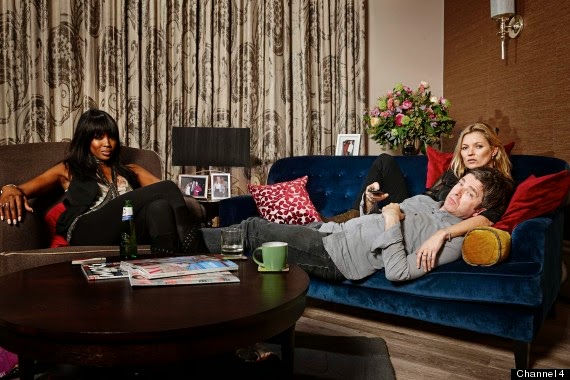 More on the show:

Gogglebox Australia is based on the UK smash hit, and is a weekly observational series which captures the reactions of ordinary Australians as they watch the news, discuss politics, scream for their beloved sporting teams, and, argue in front of the box, my fave part.

The series will follow twelve households equipped with special, locked-off cameras which will capture every unpredictable moment. I love the look of the trailer - this kind of observational TV fascinates me.
Gogglebox launched on Channel 4 in the UK in March 2013, has recently entered its fourth season.
Expect the Aussie version to be much-talked about across social media, making accidental stars of the families featured, as all good reality TV shows do. The average weekly audience in the UK is about 3 million viewers. This year, the show won the BAFTA for best reality constructed factual program, and was also nominated in the BAFTA Radio Times Audience Award Category.

Gogglebox Australia is the first jointly commissioned series between the two broadcasters - Foxtel and Network Ten - and will be produced by Shine Australia.

Foxtel Executive Director of Television, Brian Walsh, said: “Gogglebox is a game changer for Australian television. It is one of the most unique and entertaining formats I have seen in many years. The show is bound to create some new, favourite faces and certain the households will become popular in their own right as we get to know them better each week. There really is nothing else like it on television and we are delighted to partner with Ten for this terrific new addition to our lineup for 2015.”

Network Ten Chief Programming Officer, Beverley McGarvey, said: "We all watch television, we all love talking about television and this format allows us to be a fly on the wall in other people’s homes as they do just that.

“Gogglebox is original, authentic and, most of all, extremely entertaining. We are very pleased to be collaborating with Foxtel to bring this brilliant new show to Australia."

Gogglebox Australia will debut on Foxtel's The Lifestyle Channel on Wednesday February 11 at 9:30pm.

Email ThisBlogThis!Share to TwitterShare to FacebookShare to Pinterest
Labels: Australiana, Channel Ten, Everyone is talking about, Foxtel, Pop Culture, This Just In, TV, UK