Wendi Deng: The Pie. The Slap. The Divorce. 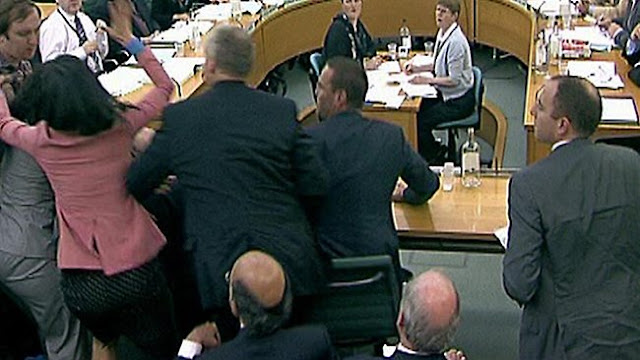 You know, the loyal wife (and former volleyball player!) of Rupert Murdodch who went the big slap on a heckler who attempted to throw a cream pie on Murdoch as he testified before a British parliamentary committee following the UK phone hacking scandal (I have always wondered if these are actual cream or shaving cream...) Watch:

The Age newspaper has reported the billionaire mogul News Corp boss and the former executive at his giant Asian media company Star TV are over, after he filed for divorce in the New York Supreme Court.

The filing stated the "relationship between husband and wife has broken down irretrievably".

Murdoch is 82 and Ms Deng is 44 and were married 14 years ago - they have two daughters, 11-year-old Grace, and nine-year-old Chloe.


Murdoch requested that custody of the couple’s daughters be shared between him and Deng, a Chinese-born graduate of Yale University 38 years his junior.

A pre-nuptial agreement signed before their 1999 wedding will ensure Ms Deng’s claim to a share of his $US11 billion wealth.

Interestingly, a former nanny to the couple, who was previously described by a spokesman for the Murdochs as a ‘‘disgruntled former employee’’, said in 2012 that Ms Deng ‘‘curses Rupert all the time. A lot of f-words. She’s always yelling, crying’’. She added: ‘‘Everyone who works for her hates her and is scared of her.’’

The article also claims Deng embarrassed Murdoch early in their marriage by telling an associate in Hong Kong that ‘‘Rupert takes Viagra, but he doesn’t really need it’’.

Murdoch's second wife Anna, who had daughter Elisabeth and sons Lachlan and James with Murdoch, reportedly pocketed $US1.7 billion in the divorce, including $US110 million in cash.