This is the fabulous comment by Rina Ferris, an Australian entertainment publicist who does not mince words, in relation to the just-released 'The Australian Women's Weekly' magazine photos of Australian Prime Minister Julia Gillard, where she is seen knitting.

She posted this comment on her Facebook feed, supporting this opinion piece by writer Amanda Blair titled 'Why I Don't Care If Julia Knits.'

"Australia. Put the needles down. The knitting needles that is. The furore over the Prime Minister Julia Gillard being photographed for The Weekly click clacking her way through a Cleckheaton Kangaroo pattern has me truly gob-smacked.

So what if she has a hobby? Everybody has a hobby and some would argue strongly that at the moment she needs this hobby — her stress relief, her little piece of sanity and calm in a crazy world more than ever.

The media hounds are in a feeding frenzy accusing Ms Gillard of taking her eye off the political ball and instead focusing on the ball of 8 ply. Seriously? Do you honestly expect her to be in Prime Ministerial mode 24/7?"

To prove her love of crochet, Rina posted THIS photo on her Facebook feed, with a caption:

Proof of my crocheting expertise: 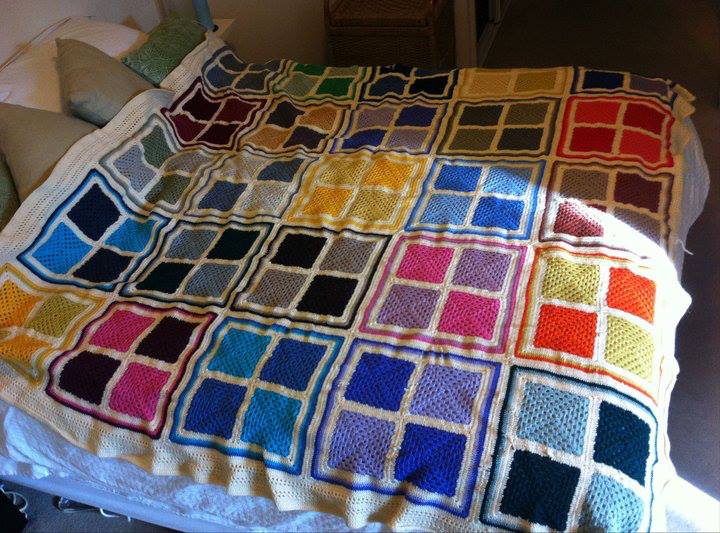 Rina, and likely many women (although I obv. can't speak for them all, nor can I give you specific numbers!) could not give a toss that Julia knits. Me included. Darn it, I wish I could knit properly... I am one of those people who starts a scarf, and then it all goes pear-shaped... in every way.

And yes, I know, I know... it's a very specific image of Julia being projected to us, and The Australian Women's Weekly has delivered an image we are now ALL talking about. Mission accomplished.

Oh, look... I am not silly. I know it's a way to skew our perception of her. I really don't mind. I'm not a fool. And neither are most people.

Just as I liked seeing her glammed up for the Mid-Winter Ball last week, with beautiful finger waves in her hair and a bright red lip.

What? She can't run the country, and look beautiful?

So, what do you think?

Is this brouhaha utterly over the top?
Posted by Josie at 19:07