The new CLEO magazine hits the stands today, and features Mila Kunis on the cover. 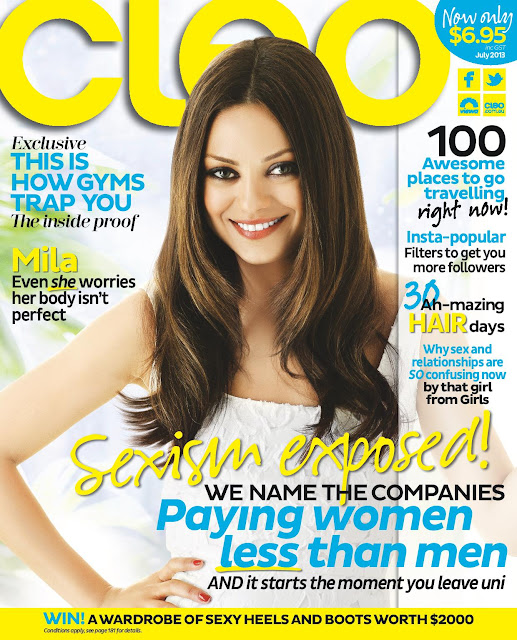 The protest follows a major analysis of 123 companies by CLEO, which found women in the same roles as men were being paid up to 25% less.  Other companies were also failing to promote women to senior roles.  See below for the list of the companies letting women down.

CLEO is seeking to equalise the pay gap and is calling on Australians who care about this to sign its Change.org/cleopaygap petition. The petition will be used lobby those companies failing to promote women to senior roles or paying them less than men working the same job.

"We found a horrible picture of inequality in some of Australia’s largest and most prestigious companies," says editor Sharri Markson.
Well-known companies listed below have joined in the campaign to equalise the pay gap (scroll down) and CLEO names some of the worst offenders below.
The companies letting women down:

How do some of Australia’s biggest companies stack up?

·     Calliden Group: Has a pay gap in six of its departments. The average female salary of a team leader was 25 per cent lower than their male counterparts. Female support paid 18 per cent less than men. In sales, the average salary was 10 per cent less for women
·     BNP Paribas: Female employees hired on an average salary of $91,880, males on an average salary of $120,050.
·     Alesco Corporation Limited: An investigation is underway into “significant” pay inequity between men and women working in the sales department. “It was noted that the average female salary was significantly less than their male counterparts,” their report says.
·     CMC Markets Asia Pacific: Female employees paid less than their male peers in senior management, management  and service departments.
·     Morgan Stanley Australia: 0 - number of female managing directors*, 20 - number of male managing directors*
·     AON: 0 - number of female senior executives*, 24 - number of male senior executives*
·     Macquarie Bank: 16 – number of female executive directors*,  145 – number of male executive directors*
·     J.P.Morgan: 62 per cent of new recruits to JPMorgan Administrative Services are men. 64.3 per cent of graduates and interns recruited are men. 29.4 per cent of the interns were female in 2011-12.
·     ACE Insurance: women make up 86 per cent of the clerical and administration roles.
·     BNP Paribas: 62 women hired on an average salary of $91,880, 120 men hired on an average salary of $120,050
·     OAMPS Insurance Brokers: “There are more males than females in our leadership and branch manager roles.”
·     Goldman Sachs:There are 53 male revenue managing directors compared to three female revenue managing directors*
·     Flexigroup: “After reviewing our workplace profile, there are some discrepancies in the remuneration of females, particularly in leadership ranks, in comparison to their male counterparts.”
·     Deutsche Bank: 7 new female graduates hired in 2011-12 17 new male graduates hired in 2011-12

And here is a list of where women will pay less TODAY (and in same cases, for much longer):

Girls pay less with a 17.5% discount to match the current gender pay gap, so support these businesses supporting women:

- napoleonperdis.com: enter the coupon code CLOSETHEGAP (case sensitive) to receive your discount on all full-priced items purchased on June 17, 2013.

Email ThisBlogThis!Share to TwitterShare to FacebookShare to Pinterest
Labels: Australiana, Celebrities, Men, This Just In, Women