The red carpet Australian premiere of the new Brad Pitt movie 'World War Z' (Brad stars in it, and he was producer on the film, via his production company Plan B) was the reason Brad Pitt finally jetted into Australia - for the very first time. Josie's Juice was one of the few sites who attended the special red carpet event. 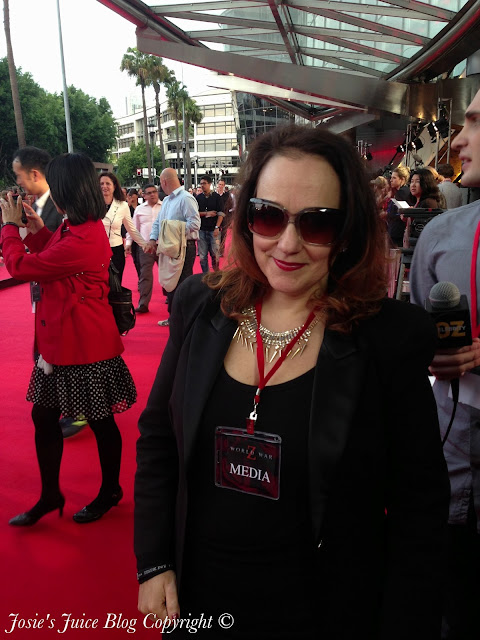 Director Marc Forster (who also directed 'Quantum of Solace', 'Finding Neverland', and 'Monster's Ball) also came along for the trip, one of many the duo has fronted (this time, sadly, without Brad's partner in love and life Angelina Jolie) across the globe in the past week or so.

The 49 year old Hollywood actor has undertaken a somewhat frenzied press tour for the upcoming zombie thriller, jumping from London to Paris to Berlin to Atlanta (Georgia) in the space of seven days. And then, he followed that with same-day, whirlwind trips in the US to Philadelphia, Chicago and Austin, Texas.
And tonight, it was Sydney's turn. 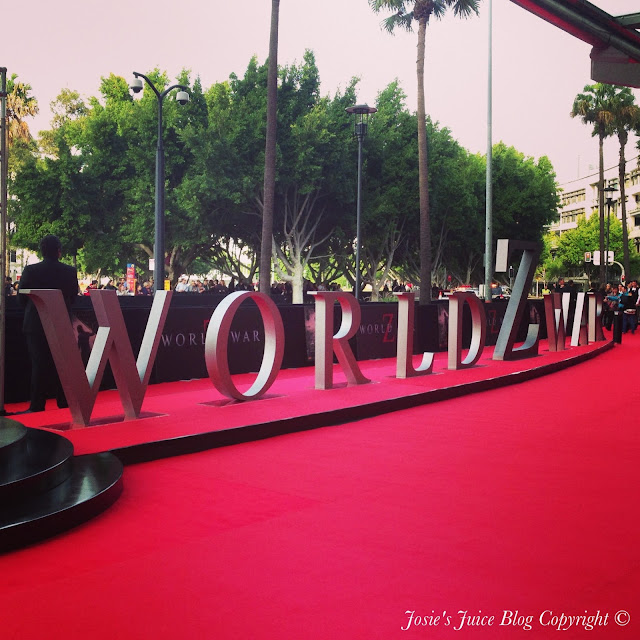 Brad Pitt was the perfect movie star from the outset. The triple-A-list star arrived at the Sydney red carpet - held at The Star - on time.
The eager fans were the ones he greeted first. He headed straight over there and took the time to pose for photos and selfies; sign autographs; have a chat, and do the whole meet and greet with much enthusiasm. The fans were in turn enamoured.
As were we. And by 'we' I mean all the assembled TV media, and the select (only six) bloggers who were asked to come along to interview him. The roped off bloggers' spot was a rather privileged one and we knew it. 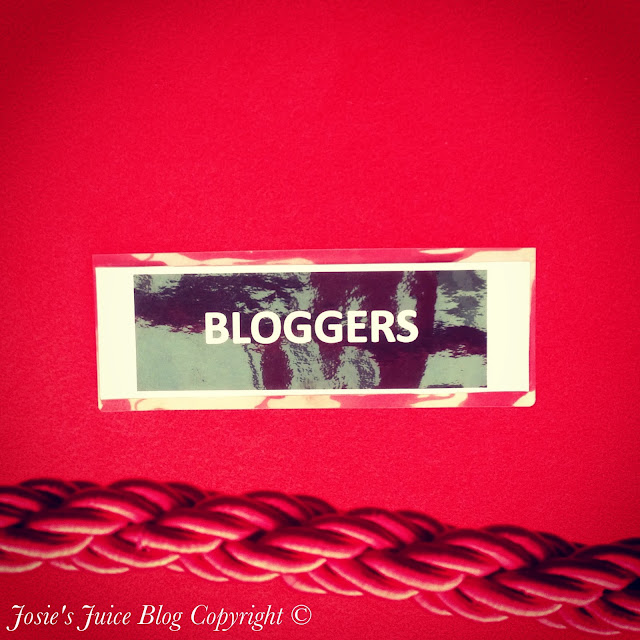 As Brad fronted us, a few of us got the chance to ask him a question. We'd talked amongst ourselves about what we'd ask when he came along. All the questions the others proposed were about the film. And that's what we were there for. 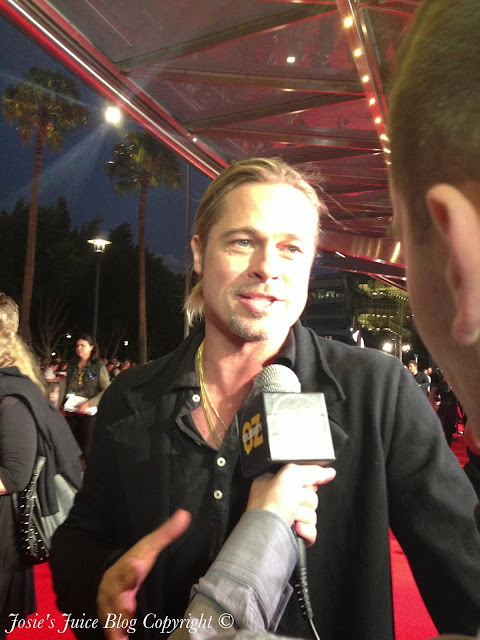 I really wanted to ask what we all really wanted to know... how is the family? What does he miss about them most when he's away?
Brad greeted me warmly, I introduced myself, and he listened intently as I asked "What do you miss most about your family when you're away?" 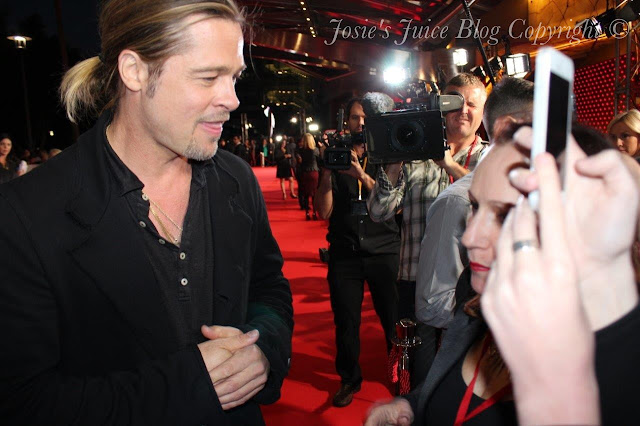 I wasn't loud enough and he leaned in closer and touched my arm reassuringly as I asked the question again. This was a man who did not take his 'celebrity' for granted. He connected with those who were there for him, and it showed. 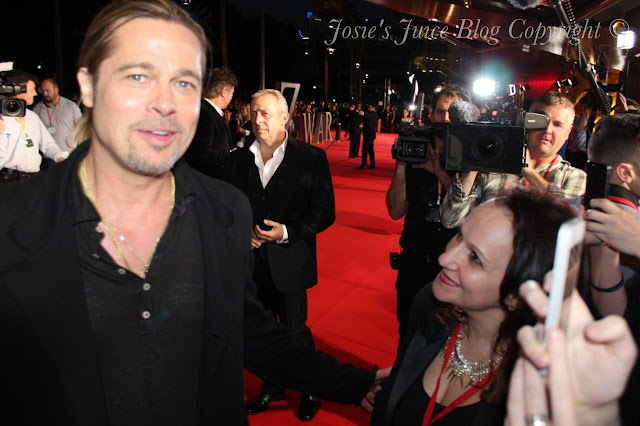 Brad answered my question with a laugh, and seemed delighted my question was not about the film.
"Oh, I miss everything about them," he said with a wide smile. "I miss the noise!"
"Well, you have a large, wonderful family, and it'd always be noisy. I have twins," I offer up, "And I love all that. I can relate."
"Oh yes, I love it too!" says Brad. "And it's always so wonderful to come back home."
The joy his family brings to him is written all over his beautifully-lined face. There's a twinkle in his eye as he speaks about them, and I suddenly find the man incredibly endearing.

Director Marc Forster was also incredibly generous with his time on the red carpet. 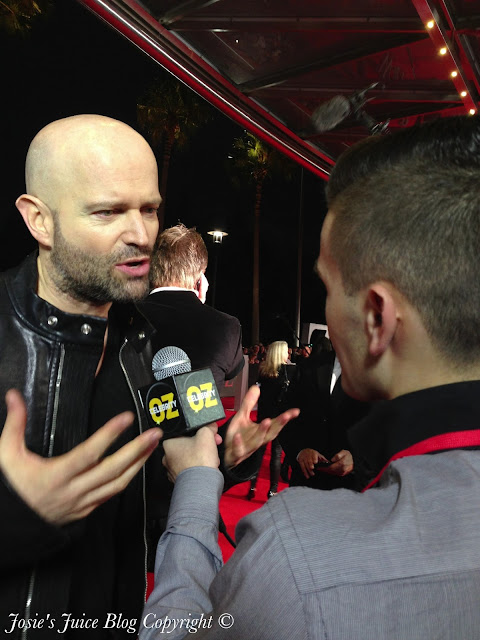 And so, the movie. 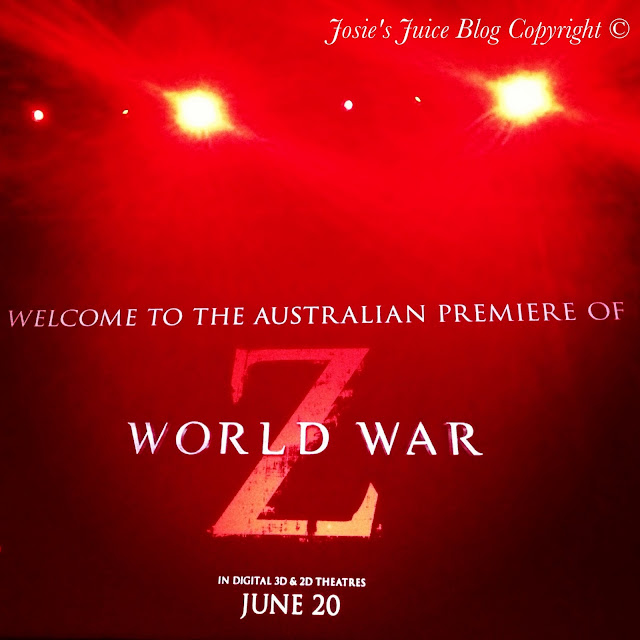 Based on the novel by Max Brooks called 'World War Z: An Oral History of the Zombie War', the movie adaptation stars Brad Pitt as a UN worker who finds himself trying to save both his family and humanity from a zombie pandemic breaking out across the globe.
So far, the movie - which was produced with a budget of over $170 millon - has received rave reviews, and he can add this one to the list:

Let me state from the outset I am not particularly a zombie movie freak nor a fan of apocalyptic adventures, yet this has both in abundance... and I couldn't get enough.

The movie had me involved and engaged the whole time, on the edge of my seat, gasping at all the right bits, and terrifying me when it was meant to. Also, laughing at some humourous spots - a can of soft drink at the vending machine... you'll know what I mean when you see it.

The 3D added that extra dimension (well, of course it did!) and was strangely unobtrusive to the film, in contrast to some 3D flicks which tip the sensory overload scale. One thing is certain: the vast quantity of nasty-looking zombies (leaving the number of scary undead dudes in MJ's 'Thriller' for, er, dead) has me not wanting to see a zombie ever again.

Brad Pitt demonstrates his acting chops - it's is his best yet: engaging, intense, and it's a true joy to watch this modern-day master on screen.

I thoroughly recommend the movie. It's clearly not date night material... unless of course you both want to crap yourselves in the dark for 116 minutes and, you know, go and get a bite to eat after and deconstruct and discuss your hopes for a zombie-free planet. Then... it's kinda perfect.

And join the social media conversation (and support Brad's new film) by including #WorldWarZ in your hashtags when you see the flick.

*Thank you to Paramount Pictures for the opportunity to be at the red carpet event.

All text and photos: copyright Josie's Juice blog.
Posted by Josie at 23:30