In exclusive footage obtained by Nine News, the partner of Australia's ex-Prime Minister Julia Gillard has spoken for the first time about the events of the past 36 hours.

And it seems he was sitting down to watch the State of Origin like many of us! (see footage link below).

He says to Nine News:


"It's been an amazing three years personally for me having gone to the royal wedding and met the Queen in Buckingham Palace, gone to Washington and met the Obamas, to China, all that sort of stuff.
"Also just getting to live in both the premises, The Lodge and Kirribilli, has been an amazing privilege and an amazing experience.
"For Julia, she's done incredible things which I'm sure in time will be shown in a much better light than it has been lately."
He said he only found out his partner's hold on the top job was under serious threat while he was preparing to watch the State of Origin.
"Yeah, bit of a shock," he said.
Watch the footage here. 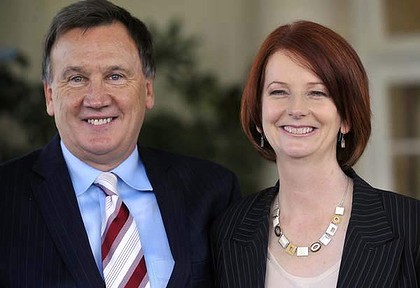 Email ThisBlogThis!Share to TwitterShare to FacebookShare to Pinterest
Labels: Australiana, News, Politics, This Just In