The report on Bruce Jenner and his interview on being transgender continues here. In the first part of the interview, he says: "For all intents and purposes, I am a woman. People look at me differently. They see you as this macho male, but my heart and my soul and everything that I do in life it is part of me, that female side is part of me.

"That's who I am. I was not genetically born that way... as of now I have all the male parts and all that kind of stuff so in a lot of ways we're different, but we still identify as female. And that's very hard for Bruce Jenner today. Why? I don't want to disappoint people."

In the very first few minutes, Bruce is very emotional, he struggles to hold back his tears, and he says: "It's going to be an emotional roller coaster but i'm going to make it through.

Bruce admits he has been "running away from all of this stuff", and says he's always been confused about his gender identity.

"I've tried to explain it to my children this way. God's looking down making little Bruce. He's looking down and He says: 'What are we going to do with this one. Let's give him a soul of a female."

Bruce continues : "Here I am, stuck. I hate the word girl stuck in a guy's body. My brain is much more female than it is male."

You can see the first part here.

Read on for the rest of the interview below: 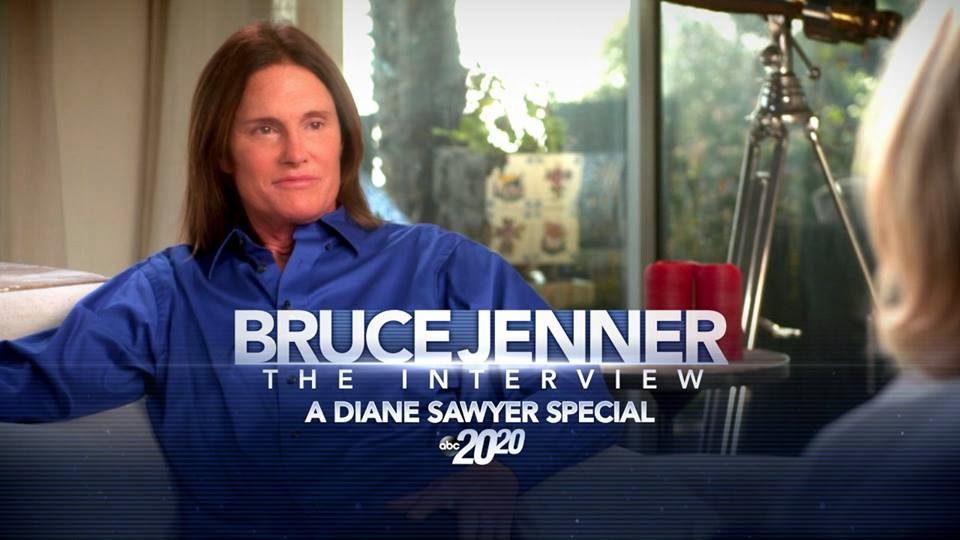 Bruce tells Diane Sawyer he is and has always been heterosexual: "Sexuality is totally different than what my issues are."

Bruce admits to feeling lost and scared after the Olympics ended: "I thought where is my beard... literally."

Bruce admits to telling his first wife, Christie, he was confused about his gender. Though Christie was understanding, he says she thought: "Like most women she thought, "'I can fix that.'"

Bruce reveals that his gender issues was one of the big reasons why he broke up with his second wife, Linda, in 1984.

The hormone therapy began for Bruce decades ago.

He admits that when he was nearing 40, he started seeing a therapist and he began transitioning. In the 1980s, he begins hormone therapy, and continued it for five years.
Bruce's older sister Pam appears in the interview, and at first she couldn't believe at her brother wanted to be a girl and she thought it was a "passing phase".

Pam explained: "He told me he used to dress up in her clothes. My big, gorgeous brother felt like he was supposed to be a girl."

It is now that Bruce says that - for this interview - the use of the pronouns of 'him' and 'he' are appropriate.

And although Bruce's mother was worried that she caused his desire to transition into a woman, the Olympian assured her this was not the case. "It's the way I was born and it's going to be okay."

Bruce then reveals he stopped his hormone therapy in the 1980s out of fear of hurting his children and the teachings of the bible.

Bruce reveals that after his motivational speeches he would feel like a "liar" and then he'd return to his hotel room so he could wear women's clothing. The sports legend even admits he once went out in public dressed as a woman.

Asks Diane: "On all the years you were on the show ['Keeping Up With The Kardashians']"?

Bruce raises he hand: "I had the story."

Bruce admitted to telling Kris Jenner about his hormone therapy when they first met, and she even saw him in women's clothing. He explained: "When you love somebody, you had a tendency. You don't want to hurt them."

"Kris and I had so many great years together and we raised phenomenal children."

"I loved Kris and I had a wonderful life with her. I learned a lot from her. I thought we had a pretty good sex life."

And in a moving admission, he adds that, in his 60s Bruce realised that he couldn't die living in "someone else's body". Powerful stuff.

Bruce admits his plans to transition was "hard on Kris".
"Kris is a good woman, I got no complaints with her. Honestly, if she had been really good with it, understanding, we'd still be together."

When some time ago Bruce went to get a tracheal shave and the appointment got leaked, and cameras were waiting, that invasion of privacy was so terrible Bruce admitted he thought about suicide.

Bruce's ex-wives, Christie and Linda, both gave supportive comments regarding his transition. At this stage, Kris had no comment.

Bruce admits he was terrified to tell his children: "I can't let myself hurt them", he says.

So, who did Bruce fell first?

The first person Bruce told was his son Brandon. "Brandon is kind of like our little Ghandi. He has a soul that's just wonderful."

Brandon then appears in the interview - he says Bruce didn't tell him the "best way", and that his dad's having to hide his secret was "tragic".

Says Brandon: "I'm getting an upgraded version of my dad and parent."

"Obviously there are parts of it that aren't necessarily easy, I'm just doing my best to cope with what's going on. When I see my dad as a woman, it might be a little shocking at first."

Bruce's three older children then show up for the interview. Says son Brody: "I thought, 'It finally all makes sense.'"

Son Casey adds: "What do you want us to call you? You can call me dad. I will always be your dad." Burt admits he once ran out of a junior high sex-ed class because they brought up gender identity. It reminded him of his dad's struggle and therefore freaked him out.

But Brandon says he has never been more proud of his dad.

Kim Kardashian was the FIRST person to know about Bruce's transition because she caught him dressing as a woman.

Says Bruce: "It was like a big secret in the family that we never talked about again." Once Kim asked again, Bruce: "I told her all my issues, and then, after it was over with, I felt much better."

Kendall then caught Bruce dressing as a woman but they never talked about it. Thinking the sisters were stealing dresses off each other, one of the young girls installed a camera in the room, only to later realise it was their dad Bruce who had been doing the 'stealing'.

When Bruce told all the Kardashians and Kendall and Kylie, they all cried - including Rob.

"Khloe's had the toughest time with it because she's had a lot of losses in her life. She lost her father at a young age and Lamar had his issues."

He adds that Kourtney is having some issues because of her three young children.

Bruce says "Kimberly" has been the most accepting. Kim even told Bruce: "Girl you have to rock it baby. You have to look really good."

Kendall and Kylie have said: "WE LOVE our dad very much. he has the biggest heart. if he's happy, we're happy."

Bruce reveals he's Republican and that he'd like to encourage Republican lawmakers to champion the cause.

But he says he wonders while in church: "How does God see me? But then I thought, maybe this is my cause in life, to deal with this issue."

When Kim asked Bruce if he's a tomboy because of his interest in racing cars and the like, he said: "Yeah, I guess I am!"

Bruce says he won't reveal his name now, because the media will go crazy with the news, and he adds that has been on hormones for a year and a half.

So, will Bruce have female genitalia? He says with a smile: "As Khloe would say — If you're living your life, you gotta have the vajayjay." Apparently Bruce has already has two referrals for gender reassignment surgery, but says there's no rush for it. Sexual reassignment surgery is down the line.

Will Bruce remarry a woman in the future? "I just want to have a free soul and a lot of great friends. I want to enjoy life. It's who I am. It's that simple." Bruce says he is "asexual" for now.

Next, Bruce shows off his closets and his dresses — he says his next house will have a 'glam room'.

Bruce then shows off the dress he'll wear to dinner with Diane, and jokes, "You won't be the tallest girl in the room."

I find that to be very endearing in that. Look… I am proud of who I am now, and I am ready to show off how I will look, and what makes me happy. 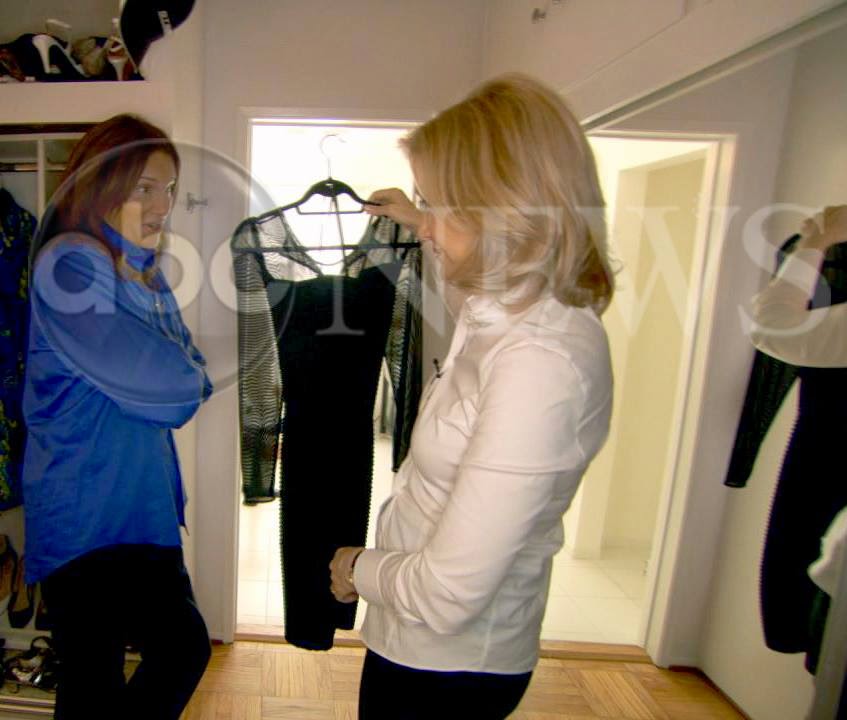 Bruce's sister admits she has never seen him as a woman.

What does Bruce want to look like? "I want to have my nail polish long enough before it chips off."

Next, the siblings a shown a video clip of their mother, where she says: "I want you to be happy, and I love you."

Bruce's father died 14 years ago, and of his opinion on the whole matter, Bruce says with a deep breath that he thinks it would have been hard for him.

He adds that his hope for the public is that they "have an open mind and an open heart."

Bruce's Olympic friends also send a message of support for him.

And in an interesting end, Bruce says wants to meet up with Diane again in a year to see how his transition is going.

Honestly, I love and admire this man even more than I did before - he is free now, to live how he likes.

For Australian viewers, to watch the interview again in full, it repeats on Sky Business (channel 602) at 8pm tonight (Saturday April 25), and will screen for the first time on free to air TV, on Channel Nine, at 10.45pm on Sunday April 26.
Posted by Josie at 13:28

Email ThisBlogThis!Share to TwitterShare to FacebookShare to Pinterest
Labels: Celebrities, Everyone is talking about, Kardashians, Men, News, This Just In, Women