It’s official!
The cult TV show 'Full House' will return to television for a 13 episode sequel on Netflix in 2016. John Stamos, who played Uncle Jesse on the popular family sitcom, breaking the news 'Jimmy Kimmel Live'.
Here is the clip (we know… what you really wanna know is: will the Olsen twins be back?):
To be called 'Fuller House', the new series will focus on Candace Cameron Bure’s character, D.J. Tanner, who is a recently widowed and pregnant veterinarian… yup! 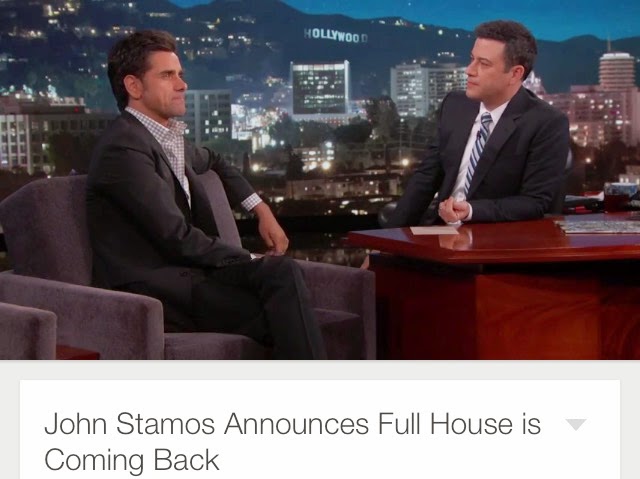 Her younger sister and aspiring musician Stephanie Tanner (Jodie Sweetin) and her childhood bestie Kimmy Gibbler, (Andrea Barber), along with Gibbler’s teen daughter Ramona, move in to help D.J. raise her two sons — the rebel 12-year-old J.D. and neurotic 7-year-old Max — and soon-to-arrive baby.
John Stamos will produce the show and reprise his role as a guest star. Discussions with original 'Full House' stars Bob Saget, Mary-Kate and Ashley Olsen, Dave Coulier and Lori Loughlin for guest appearances in the new show are “ongoing,” according to the Netflix statement.
'Full House', which aired on ABC from 1987 to 1995, followed Danny Tanner (Saget) and his family after his wife’s death.
“As big fans of the original Full House, we are thrilled to be able to introduce Fuller House’s new narrative to existing fans worldwide, who grew up on the original, as well as a new generation of global viewers that have grown up with the Tanners in syndication,” said Cindy Holland, vice president of original content for Netflix, in a statement.
In a joint statement, executive producers Robert L. Boyett, Thomas L. Miller and Jeff Franklin said: “The continued support of ‘Full House’ fans of all ages for the last 28 years has been astounding. It is an honor and a thrill to catch up with these beloved characters and explore their lives today. The love you saw on the show was real. The cast has remained a loving family off screen all these years. We are as excited as our fans to finally bring ‘Full House’ back to life.”
Are you a fan? Will you be tuning in?
Posted by Josie at 17:00

Email ThisBlogThis!Share to TwitterShare to FacebookShare to Pinterest
Labels: Americana, Cult TV, Everyone is talking about, Pop Culture, Talk Show, This Just In, TV