When I was sent this press release earlier today I thought, yes… I must watch! Looks cheeky.

Well, I just watched and… jaw has dropped. 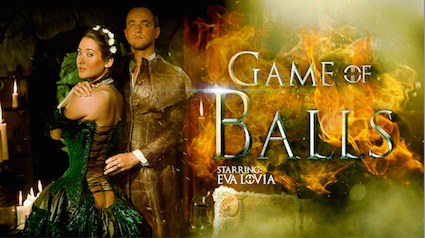 BUT! It's for a good cause.

All the doctor-phobic men out there: this is for a you!

Play with Yourself | It might just save your life. from playwithyourself.org on Vimeo.

In line with Testicular Cancer Awareness Month, introducing 'Game of Balls', which was created for Australian testicular cancer awareness charity, The Blue Ball Foundation - aimed to tackle the issue that the odds of testicular cancer is 21% higher in Australia.

The Blue Ball Foundation have teamed up with adult film studio Digital Playground to deliver the world’s first public service message inside an adult film – the press release says: "…think we both know, the best way to encourage men to check themselves for such a disease would be hidden, incognito within the middle of an adult film!"

The ‘Play with Yourself’ message is a real-life demonstration of how to check yourself for testicular cancer, performed by Eva Lovia on her male co-star.  Since launching, the life-saving PSA has spread incognito, far and wide – with over 1 million views – numbers boosted by illegal downloads thanks to the Game of Thrones torrent frenzy!

Jumping on the popular Game of Thrones bandwagon, the film is titled ‘Game of Balls’ and runs in-line with the highly anticipated season five release. With the recent GOT episode leak, consumers have taken to torrent sites desperately seeking more Westeros action.

For more on playing with yourself, guys, go here: playwithyourself.org.

Oh, and some stats on testicular cancer down under (get it!? Australian stats AND… you know… down under):

Australian men are 21% more likely to get testicular cancer than the world average.

It’s 97% curable when detected early. But sadly, most men never check themselves.
So please, do yourself a favour. Have a look.

The Blue Ball Foundation was founded by Jamie Morgan and a mate, both survivors of testicular cancer. It provides education and support to young adult men, in an effort to raise awareness about testicular cancer, one of the most common forms of cancer in Aussie men aged 20-39.
Jamie believes there is a ‘culture of embarrassment’, that discourages men from discussing and resolving problems related to man issues. They use live comedy, inspirational talks in schools and workplaces, YouTube videos, events and social media to build a culture where embarrassment does not prevent men from checking ‘their boys’.
You lads seriously rock! Go you two.
Posted by Josie at 23:26