Originally published here, this post I just wrote on Annie Nolan is being widely read because… well, read the whole story before and see for yourself:

Annie Nolan, a blogger who is married to AFL player Liam Picken, has posted this photo on social media, with the caption below, and it has been shared over 20,000 times from her page. 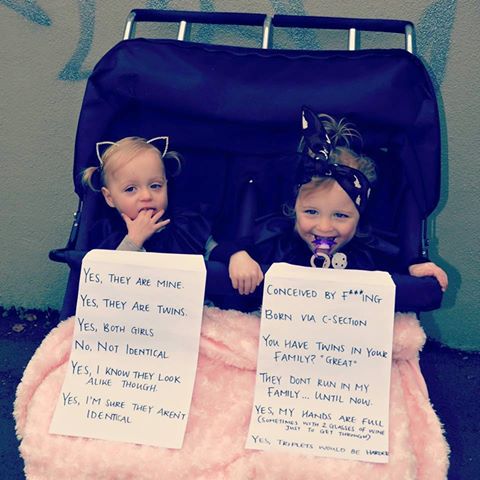 I REALLY wanted to leave these signs on the pram today. As a twin mum, you get asked a series of questions/hear a series of statements EVERYTIME you go out. I know most people are coming from a great place and are just curious however many can be quite intrusive and after a while it's just plain exhausting. And since I was heading into the city, I knew the questions would be coming thick and fast... but I chickened out on the train and took them off!
P.S- it is a joke people 😜
‪#‎twinlyfe‬ ‪#‎twins‬ ‪#‎twinquestions‬ ‪#‎doubletrouble‬ ‪#‎cliches‬ ‪#‎delphiandcheska‬

Since her post has gone viral, she has posted this: 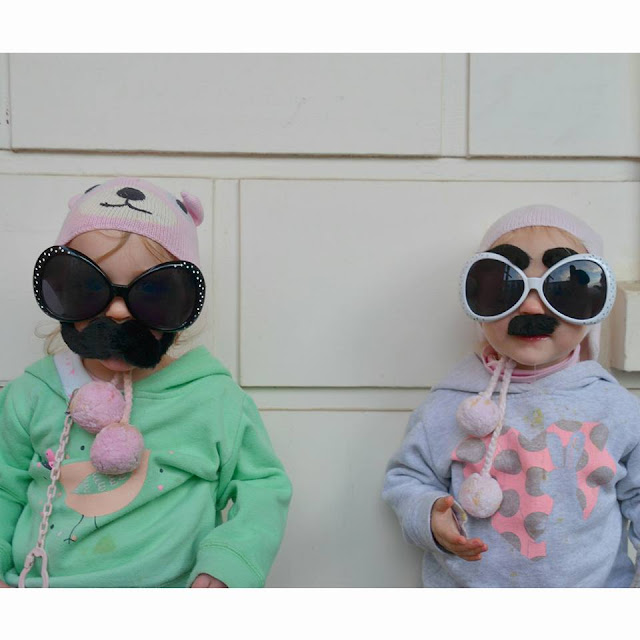 And more recently, Annie posted this:

You know that feeling when a little in-joke between friends turns international? Yeah, nah? Well that is what I am feeling at the moment! Hahahaha. Liam leaves me for 4 days and his kids end up in the British News. Whoops!
PS- the headline is tad exaggerated probably to encourage people to click on it. I'm not fed up at all! It was a joke gone a little mad. My twins are MY FAVOURITE TOPIC to talk about!
PPS- The trolls and haters are way more fierce than footy crazies! Haha. Love it 😜
PPPS- Hi lovely English men and women! Thanks for your support. My best friend was born there and her family are from there (Manchester) so thank you for providing me with such a beautiful soul. Lots of love to you all xx

Me? As a twin mum, for a LONG while after I gave birth to my twins I was asked if twins run in my family, which I honestly think that sometimes it was just an alternate way of people asking: did you use IVF? I can hereby publicly acknowledge that no… I did not use IVF. Yes I had sex with my husband to create my twins. See? What does it matter anyway! And ewww, too much information for you, isn't it? Yes, I agree.

I do recall once, when my twins were over a year old, I went out to a twins get together in a public park, with my mum and my babies. A woman who was a total stranger came up to me and within five seconds asked me if my twins were IVF babies. I wish I was kidding. I was shocked and definitely annoyed. This woman was just being a sticky beak, and didn't even try to cover that up. That's an example of a shitty attitude in amongst mostly lovely, well meaning, genuinely interested people.

Also, when people immediately assume I delivered them via a c-section, I obviously feel the need to clarify: no, it was not a cesarean, yes it was a vaginal birth, yes I was given an epidural, yes I am a champion, and yes, so are all the women who gave birth via c-section. So there. (I DO love the reactions of women when I tell them I pushed two out, though; they are genuinely encouraging and impressed… and yes, I felt like I could conquer the world afterwards).

Did I mind all the questions about my twins themselves? NO, I loved it. I loved telling anyone - friends, colleagues, the checkout assistant, the taxi driver - that I was having twins, and after their birth, I was so proud to talk about them to anyone who would listen. Did I get tired of it? Not really. And no, my twins CAN'T be identical because… they are a boy and a girl.

Do I understand Annie's post? Yes, I do. Because guess what? It's HER experience and hers alone. She adds some humour to it, and is really not hurting anyone. Let's not make it about us, about infertility, about anything other than what was a private post (what's private on social media though? Nothing!) which has now gone viral.

Email ThisBlogThis!Share to TwitterShare to FacebookShare to Pinterest
Labels: Everyone is talking about, Family, Social Media, This Just In