Seeing this book cover is one of the most wonderful, heartbreaking, happy, and sad of moments.

It is the book cover for 'Doujon's Heart', by Greg Callaghan and Ian Cuthbertson. 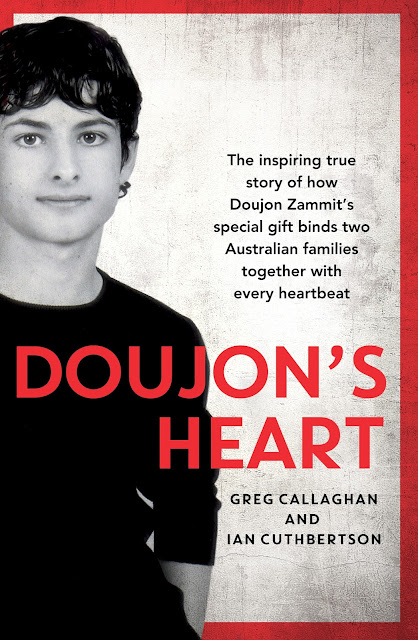 It is a long time coming, this book, and is deeply personal and the subject matter will both inspire and break your heart.

Doujon Zammit was a young man on his first overseas trip and a series of events would eventually end his life in the most tragic of circumstances.

This book is an account of that, but so much more.

Here is the book blurb, from publisher Allen & Unwin:

The extraordinary story of how the gift of a heart gave meaning to a senseless tragedy and inspired a lifelong friendship between two families.
When 20-year-old Australian Doujon Zammit was bashed by bouncers on a Greek island in July 2008, his tragic story made headlines in both Australia and Greece. Doujon had sustained terrible head injuries and would not recover. His grief-stricken parents, Oliver and Rosemarie, honoured Doujon's previous wish to be an organ donor, and Oliver became famous overnight in Australia and in Greece when he announced that Doujon's organs would be donated to Greek recipients.

The day Doujon received his fatal injuries was also the day 31-year-old Greek-Australian journalist Kosta Gribilas was given a death sentence in a hospital in Athens. Critically ill with virus-induced heart failure, he was told he had only two weeks to live. Without an urgent transplant, Kosta knew he would soon die. He'd followed Doujon's story on TV, and even as he watched Oliver's emotional announcement, Kosta hadn't thought he might be saved - the doctors didn't want to give him false hope. On 2 August, after an emotional farewell to partner Poppy and his family and friends, Kosta drifted asleep for what he thought was going to be the last time. A day later he woke up with Doujon's heart beating in his chest and the life he'd longed for now ahead of him.

Because of the public nature of Doujon's fatal attack, Kosta met Rosemarie and Oliver when they visited Athens. It was to be the beginning of an extraordinary, heartwarming friendship that would sustain both families through the dark days to come - a roller-coaster course of events neither family could have possibly predicted. Through all this, Kosta is constantly reminded of Doujon's remarkable gift: 'How can I ever forget Doujon, when every heartbeat reminds me how blessed I am?'

A beautiful, inspiring story about two families united by tragedy and how a selfless and courageous gift of love keeps on giving to this day.

You can pre-order this book at this link here.

The book's official release date is September 2015, though will be released at the launch in late August.

From a personal perspective, I am deeply moved by this book as I knew Doujon, and know his whole beautiful family well. These people personify such grace in the the face of absolute gut-wrenching adversity.

You can read my interview with Doujon's parents Rosemarie and Oliver Zammit here.

And you can read about the annual 'Unite Against Violence' walk the Zammit family are involved in here.

Email ThisBlogThis!Share to TwitterShare to FacebookShare to Pinterest
Labels: Australiana, Books, Causes, Everyone is talking about, Family, Happy, Insight, Inspiration, Sad, This Just In