This… is a must-see.

The new Australian drama screening on ABC TV is called 'Glitch', and the original storyline and outstanding acting will have you glued. Right from the very beginning. The acting is A1. The cast is exceptional. Just watch it, okay!

And tonight, you can binge-watch like mad: ABC TV has taken the rare step to allow you to watch the WHOLE series after the first episode screens on ABC TV. 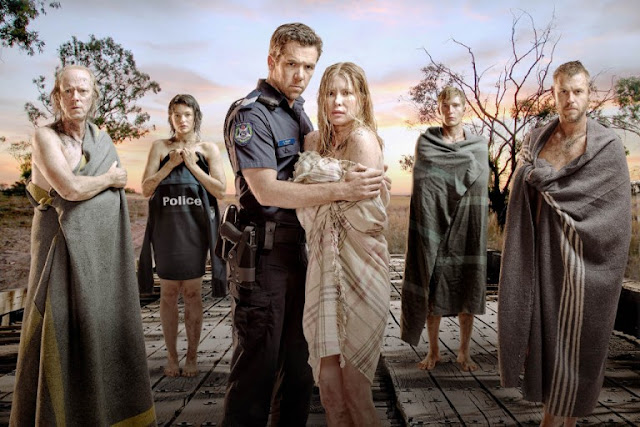 Yes, in a network first, the six-part must-see drama series Glitch will premiere on ABC on Thursday 9 July at 8.30pm then immediately following the TV premiere, the entire Glitch series – all six episodes – will be available to watch exclusively on ABC iview.

Here is a link to the ABC iview page.

SO, this means that - in these times of the-viewer-is-king approach to TV viewing - the audience get to choose how and when they watch 'Glitch' – when it plays out weekly on ABC TV, or every episode, whenever it suits on ABC ivies.

(It may sound crazy, but sometimes, I love the anticipation of waiting to see the next ep, next week. So old school. I have seen the first two eps of this though… and I want more, now).

For a first look at Glitch in this extended trailer:

ABC TV Head of Programming Brendan Dahill explains “Glitch really is something of a ground breaking project for the ABC.  Increasingly, TV audiences are demanding more in regards to how and where they watch content – we are acknowledging this by taking this bold approach. Packed with compelling storylines and cliffhangers, we’re sure our audiences will take advantage of this great opportunity to access the entire Glitch series, free on ABC iview.”

Made by Matchbox Pictures (with such gems as 'The Slap', 'Old School', 'The Devil’s Playground' under its belt) and starring a stellar cast including Patrick Brammall, Emma Booth, Rodger Corser, Genevieve O’Reilly, Sean Keenan, Ned Dennehy, Daniela Farinacci (I LOVE her in anything, an exceptional actress) and Andrew McFarlane, Glitch tells the emotional story of six seemingly unconnected people who have inexplicably returned from the dead, alive and in good health. With no memory of their identities, disbelief quickly gives way to a determination to discover who they are and what has happened to them.

But the mystery soon becomes deeply personal to Sergeant James Hayes (Patrick Brammall) when he recognises one of the group: it’s the love of his life, his recently deceased wife Kate (Emma Booth - who is SO engaging in this).

Kate died two years ago, so how can this be? James is stunned and confused as he grapples with the implications of Kate’s return. More than anything he wants to be with her and keep her safe. But a lot has changed since she died.

He enlists the help of local doctor Elishia McKellar (Genevieve O’Reilly, also brilliant) as he struggles to keep the case hidden from his colleagues, his new wife, and the world. Having this secret tests him as a policeman, a husband and as a man, as one thing soon becomes clear: the group are all linked in some way, and someone knows the truth about how and why they’ve returned.The six-part drama series Glitch is a moving story about love, loss and what it means to be human, and the dark secrets that lie behind our characters’ lives.


Glitch is described as a "moving story about love, loss, the past and what it means to be human." Got me right in the feels with that line… THAT'S what I am all about.

Here is the HUGELY talented Patrick Brammal as James Hayes:


And his explanation of the show:

Tune in tonight on ABC TV at 8.30pm to see episode one of 'Glitch', and watch on ABC iview soonafter ep one.
Posted by Josie at 17:23

Email ThisBlogThis!Share to TwitterShare to FacebookShare to Pinterest
Labels: ABC TV, Australiana, Everyone is talking about, This Just In