US Confirms First Measles Death In Over a Decade

The headline on the Jezebel site screams: ' You Did It, Jim Carrey: US Confirms First Measles Death In Over a Decade.'


Fans of Jim Carrey, his ex Jenny McCarthy, and any other anti-vaxxer out there will be pleased to learn that their efforts to keep children safe has paid off. While these fearless warriors were out there protesting California’s mandatory vaccination law, a woman quietly died of measles. But you know, it was probably due to vaccinations in the first place.
The woman, who is unnamed, is the sixth person to contract measles in Clallam County, Washington. Slate reports that the vaccination rate there is much lower than it should be and that the victim likely contracted measles when she visited a health facility at which someone with measles was present. The victim’s immune system was already compromised due to medications she was taking, so the disease didn’t have a hard time taking hold. The woman died of pneumonia, which has been ruled a complication of the measles.
Read the whole article here.

From personal experience, as someone who:

- has a mother who was was extremely immuno-comprimised (low body weight due to advanced dementia, plus a rare and very serious blood disorder) who I cared for and loved and fought for tirelessly, and who then succumbed to pneumonia, and was exposed to illness and people who were sick

- HAS COMMON SENSE AND BELIEVES DOCTORS - NOT GOOGLE EXPERTS

This whole story makes me so very mad.

It also makes these people mad, a snippet on the Jezebel Facebook thread: 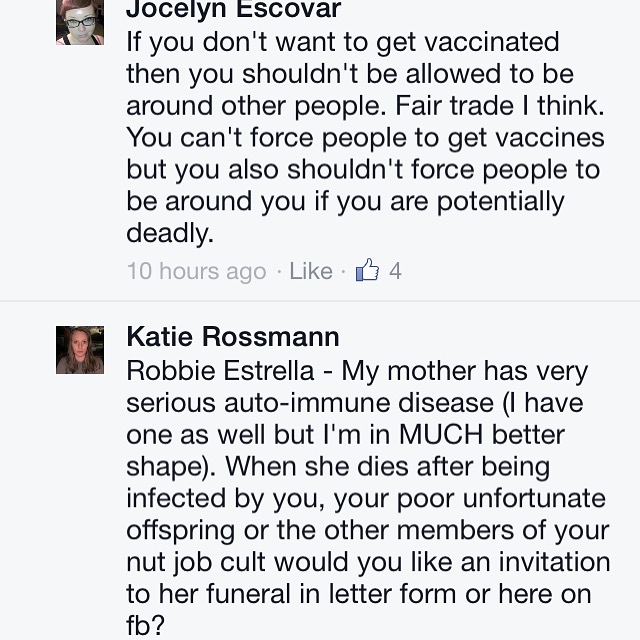 Email ThisBlogThis!Share to TwitterShare to FacebookShare to Pinterest
Labels: Americana, Controversy, Everyone is talking about, Health, This Just In