Alex McKinnon Book: Where To Buy

Did you watch 60 Minutes Australia tonight?

At the end of the interview, you would have heard Alex has a new book out.

Here is a short blurb, and a link for where to get it (but first, the cover): 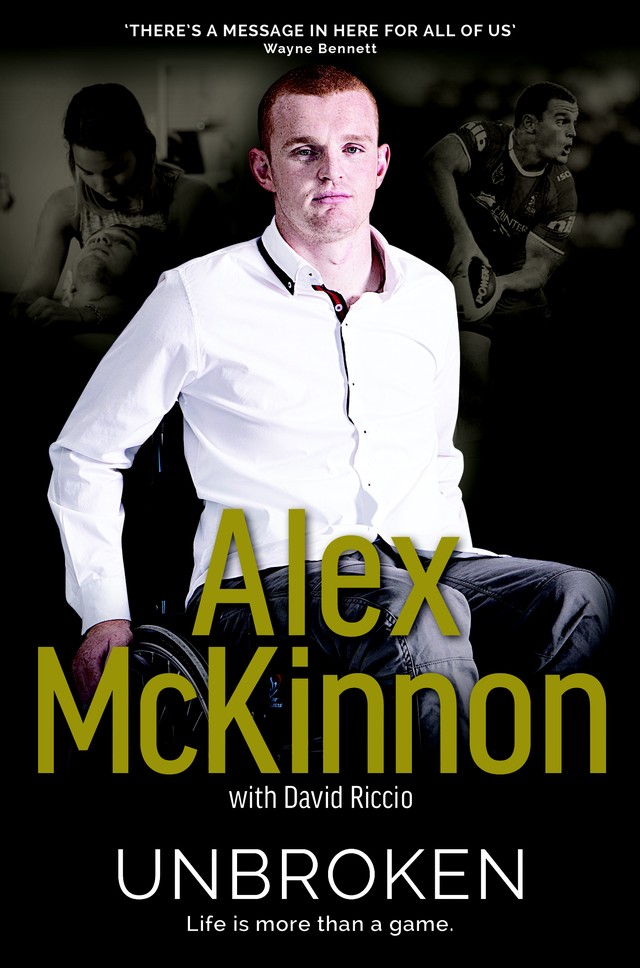 Rugby League was Alex McKinnon’s life. Born into a football family, from five years old Alex played junior football with the Aberdeen Tigers at McKinnon Oval, a ground named after his grandfather.

A talented and committed young player Alex was signed to the Dragons as a 16 year old and made his NRL debut at 19. Captaining the Junior Kangaroos, and having established himself as an NRL player at 22, Alex was clearly one of the leading players of his generation.

However in the 39th minute of the Newcastle Knights vs Melbourne Storm game on March 24 last year, Alex’s life changed forever. A tackle gone wrong damaging his spinal cord leaving him paralyzed from the chest down.

In the days that followed Alex was told not only was his football career over, but he would likely never walk again. Like any young person in this situation - let alone a professional athlete – this was devastating. Alex’s life as he knew it was over.

The story of what followed, both privately and publicly, is simply extraordinary. Far from being over, Alex came to realise a new life had just begun.

For the first time Alex talks of his exact thoughts and feelings during the those first fateful moments on the field, and with raw honesty takes us through his painful first days and weeks in hospital, including the heartbreaking moment he is told the ramifications of his injury.

Those who know Alex best are not surprised at what happened next.

Here is where you can pre-order the book.
Posted by Josie at 23:42

Email ThisBlogThis!Share to TwitterShare to FacebookShare to Pinterest
Labels: Australiana, Books, Inspiration, Sport, This Just In