Hey Hey It's Saturday - back on Saturdays this month. 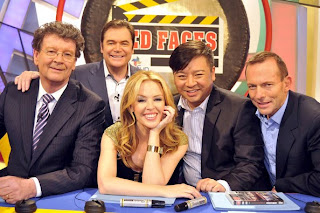 According to mUmbrella, Hey Hey It's Saturday is now moving to Saturday when it returns later this month.

The show, hosted by TV veteran Daryl Somers, returns to the network on October 16 at 7.30pm.

Earlier this year, two strongly rating reunion shows saw Channel Nine commission a new series of Hey Hey on Wednesday nights, though it struggled to rate more than a million and the series was put on hiatus.

Nine has said the move to Saturdays is “in direct response to audience feedback”.

Somers added: “We’ve heard the message loud and clear – viewers want to see Hey Hey back where it belongs on Saturday nights.”

Brace yourself people.
Posted by Josie at 16:34