The View Mark II - new US talk show The Talk 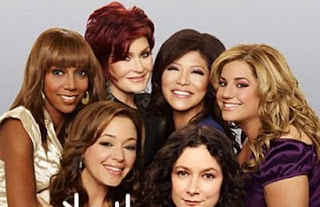 Sara Gilbert - one of the daughters from TV show Roseanne - is now a co-host and executive producer of The Talk, a US talk show which premiered October 18, 2010. Along with Gilbert, Julie Chen, Sharon Osbourne, Holly Robinson Peete, Leah Remini and Marissa Jaret Winokur will be other co-hosts. The show has been drawing obvious comparisons to hugely successful TV show The View.

Interestingly, some early talk in the US about the show has centred on Sara's personal life.

Sara came out as a lesbian earlier this year - she has been in a relationship with Allison Adler since 2002, with Adler giving birth to the couple's son, in October 2004 and Gilbert giving birth to a daughter, in August 2007.

"The first place I wanted to (talk about my partner) was not a CBS press release," said Gilbert .

"I really don't feel like I'm a poster child for anything," she said, after the show's press session concluded. "We'll be inclusive and it's not going to be an issue. "

Gilbert has assembled Leah Remini (that firecracker from TV show King of Queens - sooo many people say I remind them of her), Marissa Jaret Winokur (Hairspray), Julie Chen (The Early Show), Sharon Osbourne (America's Got Talent) and Holly Robinson Peete (Celebrity Apprentice) for her cast, focusing the show on mums discussing issues.

At a press session for the show, Remini admitted "sometimes I'm very unlikeable as a person," and insisted her views as a member of the Church of Scientology won't surface in all the show's discussions. "That other thing (Scientology), is not even part of my discussion."

Osbourne (I am not a fan of her, but I know plenty are) cracked up the press room by saying her husband, legendarily rocker Ozzy Osbourne "doesn't even know I'm doing the show. He thinks I've gone to America's Got Talent."