The new Cleo magazine has hit the newsstands today... and the September issue is
jam-packed again. Here is the cover, with the gorgeous Blake Lively front and centre. 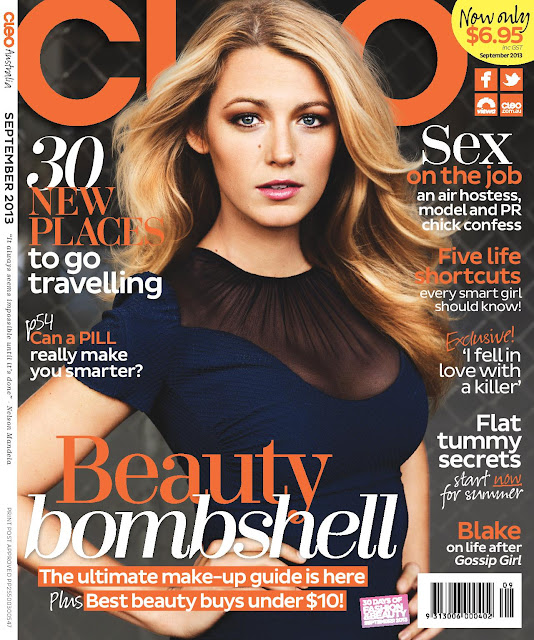 In this issue, one of the powerful stories is one where Australia's fave late night newsreader Sandra Sully reveals she was bullied. A lot. In her workplace.

Sandra tells Cleo she has had a long, ongoing problem with a vicious bully at Channel Ten. She was tormented by a woman in the office who tried to sabotage her career, and left her vulnerable and upset.

"It escalated to a level where I was very distressed... She would sabotage events or issues relating to my work," Sandra says of the bully. The Ten news anchor only chose to share this private and emotional story of workplace sabotage to help young women. "I've been reluctant to talk about this previously, but I do think Cleo is the right place to tell young women that you can't be afraid to call out inappropriate behaviour."

And in an exclusive, the ex-girlfriend of Adrian Bayley, the horrible person who raped and murdered Melbourne journalist Jill Meagher, has spoken exclusively to Cleo about her toxic relationship with Bayley.

The mother of two - Loretta O'Neill, 35, from Victoria - alleges she was raped by Bayley when he was on parole. She says she will forever regret failing to call the police after the alleged rape. "If I had gone to the cops and he was arrested, he would've been locked up and that poor woman could have been saved. I am so very, very, sorry." Loretta told Cleo she did not know about his past or that he was on parole. "I thought he could have been The One, that we would have made something of it and maybe got married."

And, another investigation by Cleo, they have uncovered how students are turning to a new form of 'smart drugs' to help them focus and improve their academic performance: Modafinil.

A prescription medication only approved in Australia for sleeping disorders, Modafinil was first used by workers in the finance industry after a Silicon Valley millionaire credited it with his success. Now, Cleo reveals the drug - dubbed Viagra for the brain - has become hugely popular with high-school and university students who are buying it online.

"I take it when I've got exams coming up. Because it is such a strong drug, it influences every part of your life," one student told Cleo.

Australian drug expert Paul Dillon confirmed Cleo's report, saying: "This is a new drug, a new phenomenon. It's no great surprise that people are going to look for drugs that will make you smarter." Medical experts warn the drug is dangerous, can interact with medications and worsen pre-existing psychiatric disorders. (Full story in Cleo magazine, page 54).

Also, Cleo investigates the landmark case, where the NSW Education Department has paid damages to the family of school girl Brianna De Vries who committed suicide after severe cyber-bullying.

The popular student was a happy teen until her peers at Woolgoolga High School tormented her with lots of cyber-bullying and psychical assaults. At age 14, Brianna took her life in April 2010.

After commencing legal action last year, the family's solicitor, Greg Walsh said they have received damages from the NSW Department of Education and Communities and settled for an undisclosed sum out of court. "On the evening of her death, Brianna and her eldest sister tried to talk about the cruel remarks on Facebook,'' he said. "Despite the best endeavours of her parents, the school and its teachers let (Brianna) down."

Email ThisBlogThis!Share to TwitterShare to FacebookShare to Pinterest
Labels: Australiana, Magazines, Men, This Just In, Women