The August 2013 edition of CLEO is out and it's as jam-packed as ever.

Here's the beautiful cover with the stunning Amanda Seyfried: 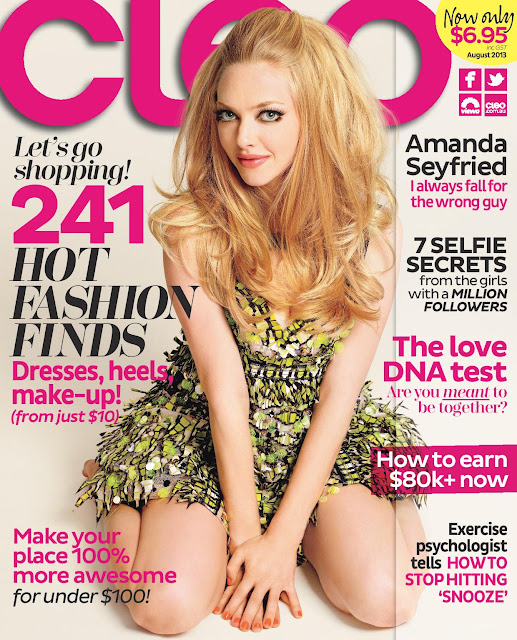 In an exclusive interview with CLEO, model Nikki Phillips shares her painful battle with cervical cancer – something she has kept secret until now.

“At the gynecologist’s office, I sat down and she introduced herself. Then she simply said, “You know, I am just going to get straight to the point. You’ve got cervical cancer.” I was on my own and everything just froze around me. I couldn’t tell you what she said next.” said Nikki Phillips. The story is as emotional as it is inspiring.
In an altogether different piece, scientists have discovered genes linked to romance and fidelity – and can now do a DNA test to determine whether someone is likely to cheat, or whether a couple is compatible.
Macquarie University biologist Professor Michael Gillings says the $900 test will be available later this year or early next year. Would you be keen on it?
In her CLEO magazine column, Jessica Rudd (daughter of the PM, Kevin Rudd) tells politicians to stop the “point-scoring” and “squabbling” this election.
“We’re about to be inundated. Ads with booming voiceovers. Debates. Billboards. Breaking news. Polls. Poll analysis…. I wouldn’t mind all of that if it wasn’t so negative and adversarial. It’s a turn-off. A criticism constantly leveled at our generations is that we’re off in our own world doing our own thing. They say we don’t engage, that we float around with our legs in skinny jeans and our heads in the interwebs. Well, I’m sick of it. They’re letting us down. They’re the ones in their own world. Is it any wonder we tune out?
“On behalf of young people everywhere, I make this plea to all our representatives, their staff and the press gallery: stop squabbling and grow up.”
Rudd says Parliament is like the Lindsay Lohan film 'Mean Girls'. Ouch.
Now that the election has been announced for Saturday September 7 2013, it will be interesting to see where all the squabbling ends and the real stuff begins. The 'Australia Votes: Leadership Debate' will screen tonight from the National Press Club in Canberra on ABC1 from 6.30pm.

And in exclusive research from the government initiative 'The Line', revealing (and extremely worrying) info on young women who are choosing to be in violent relationships rather than be single.
The research showed any relationship – even a bad one – is considered better than not experiencing a relationship at all.
“The research identifies that young women’s’ perceptions of relationships are from peers and pop culture,’’ CLEO editor Sharri Markson said.


“It’s extremely worrying that pop culture, from music lyrics to celebrity influences, are making girls feel like it’s normal to put up with violence.”
What to say about this last story except this is essential, eye-opening reading, and something young women must read and share and talk about.

August CLEO magazine is out now.
Posted by Josie at 15:23