Mess with a special needs mum and… God help you.

Hell hath no fury like… a tiger mum of a special needs child.

I keep thinking of the words my friend with an Asperger's child: "You will be his strongest advocate," she said when I told her my son was diagnosed with autism.

I didn't quite get it yet, but I got a good sense of it.

And not that I have ever had to get my claws out - just yet - to defend and speak up for my son. But goddammit, I would, and I will.

Just as Julie Webster did for her daughter Josie, pictured here: 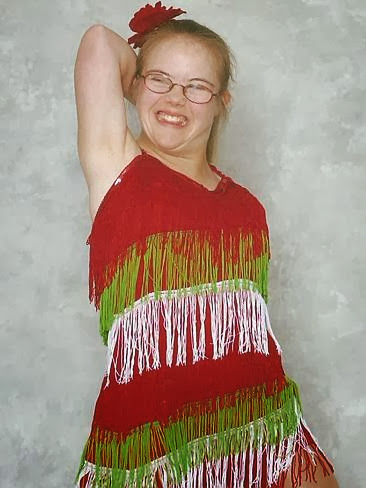 Josie is in year 10 at Engadine High School. Her Year 10 formal was last week, on Thursday. Julie found out about it in the worst possible modern-day way: via photos on Facebook post-event.

Julie was so upset and hurt, she decided to show the world how beautiful, capable and confident her gorgeous daughter Josie is. Here is the soon to be viral video:

Until the event on Thursday, neither Josie nor her mother Julie knew a Year Ten school formal had even been planned.
Also: proceeds from ticket sales for the dance were going to fund the Engadine High School special needs unit where Josie is among a number of students with "mild" or "moderate" learning difficulties. So, it's kinda weird Josie did not get an invite (and neither did four other special needs kids), no?
Heartbreakingly, another special needs student bought a dress in anticipation of a pre-Christmas party, only to find out on Facebook the formal had already taken place.
"She was devastated," Julie Webster tells news.com.au in this article.
School principal Joanne Jarvis has refused to comment, although she has sent an email to Mrs Webster saying the school had no involvement in the party.
WHATEVER happened and whoever is to blame (can somebody please 'man up' and admit responsibility, and stop embarrassing Josie and Julie, and provide a little dignity to the whole debate?!), it should not have happened, and Josie (and Julie) will never get that opp to celebrate this important event again.
At my son's special needs unit - and his school in general - I could not wish for a more inclusive, wonderful, embracing spirit. As I dropped my kiddies off this morning, I asked one of the teachers from the special needs unit if she'd heard about the story. I filled her in. "Disgusting," she said. Her heart sunk and her face said it all. With a few words exchanged, we understood each other completely.
Again, whatever happened, my heart aches for Josie and Julie. You would understand, yes. Maybe, possibly. Ask a special needs mum what she thinks about it all in the depths of her heart and you see and understand the pain Julie speaks of.

However, something here does NOT add up. The school says they did not know about who was invited and I believe them. Indeed… read below:

Engadine High School would like to correct the inaccurate reporting of the recent Year 10 formal. This event was NOT organised by the school but was a private function organised by a group of parents. The school understands that notes were distributed to students in Year 10 including students in the Support Unit on a number of occasions during roll call. The school has been assured by other Year 10 parents of the Support Unit that they received the notes and invitation. The event also had its own Facebook page publicly available. As such this occasion was a matter for individual students and their families to decide if they wished to attend.
Engadine High School’s strong record of active inclusion for students with special needs in all aspects of school life as exemplified by participation in this year’s Schools Spectacular - extends to instilling in mainstream students the importance of this principle outside as well as inside school.
Engadine High School will continue to actively pursue the schools values of inclusivity, participation and care for all the children the school serves and stand very proud on our record in this area.
Posted by Josie at 20:00