Jennifer Lawrence has confessed she was left mortified when a housemaid arranged her collection of sex toys during an appearance on Conan on Wednesday.

The outspoken actress said she had been bought a 'copious amount' of the items during an appearance where she was meant to be promoting her latest film 'American Hustle'.

Explaining the story to show host Conan O'Brien, she said: "This is actually really funny. Somebody as a joke bought me a bunch of butt plugs...

Here is the video:

"The maid was coming so I was like, "Well I’ll just shove this under the bed so she doesn’t see all these butt plugs. She might not know they are for a joke."

After thinking she had gotten away with it, she was especially mortified when she went back into her room and discovered the hotel worker had given them pride of place next to her bed.

"Then I came back and all of them were brought out of the bed and were in this beautiful display on my bedside table,

"I think she knew what she was doing. They were under the bed.

Her funny story came on the same day it was revealed she thinks it should be illegal to call someone fat.

In an interview with Barbara Walters she said:  'All of the sudden being funny is making fun of the girl that's wearing an ugly dress.

'And the word fat! I just think it should be illegal to call somebody fat on TV.' 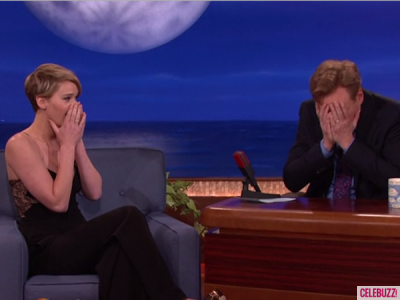