Following Gisele Bundchen's breastfeeding photo (in which she breastfeeds her one year old daughter Vivian, while a hairstylist, manicurist, and makeup artist tend to her, pre- photo shoot), actress Emmy Rossum has posted what Aussies would call a 'piss-take' photo. 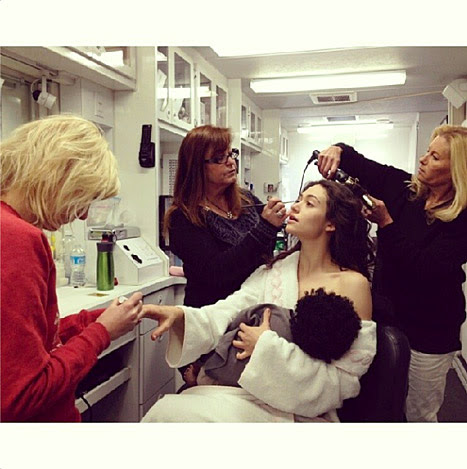 "I feel ya girl," Emmy captioned this photo of herself.

Here is Gisele's photo below... a few words on that below... 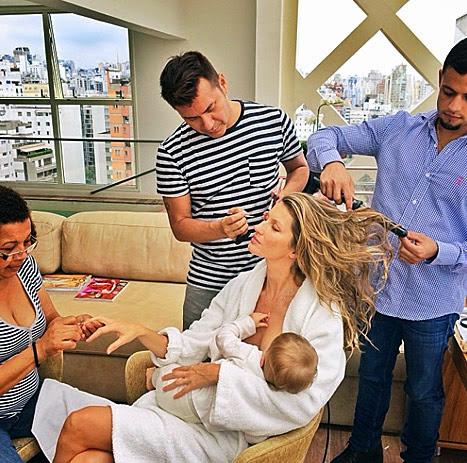 "What would I do without this beauty squad after the 15 hours flying and only 3 hours of sleep #multitasking #gettingready," she captioned the photo.

Offended by this photo? Wanting to join what was described as 'a media storm', the 'outrage' over this pic?

Please. Stop telling me how I apparently feel.

I am not outraged. At all. What for?

She's a model who has a job to do, she's sleep deprived, and she still breastfeeds her baby. Awesome.

What does this photo say about me? Or you?

There is context and history, sure, about Gisele posting this photo.

She did cause some kind of 'outrage' amongst some women when she told Harper's Bazaar, that breastfeeding should become a mandatory, "worldwide law."

As someone who breastfed her twins for several months, sometimes at the same time (did you get a visual? Yeah, like that), and sometimes topped my hungry babies up with bottle feeding, I know that the only medal I deserve is one for keeping my babies fed and alive and clean each day. Beyond that, I am not a hero. And neither is Gisele. And there should be no 'law' to tell me how to best satisy hungry, screaming babies. Do you think you'd be all Earth Mother if your child is yelling your house down because they are hungry and your boobs are simply not doing the trick? Don't you think you'd reach for the tin? Yup.

Indeed, after the mini hoo-ha, she later clarified her comments on her blog: "I understand that everyone has their own experience and opinions and I am not here to judge. I believe that bringing a life into this world is the single most important thing a person can undertake and it can also be the most challenging. I think as mothers we are all just trying our best."

"My intention in making a comment about the importance of breastfeeding has nothing to do with the law," she wrote.

"It comes from my passion and beliefs about children. Becoming a new mom has brought a lot of questions, I feel like I am in a constant search for answers on what might be the best for my child." The model and her husband Tom Brady also have a young son Benjamin, while Tom has a six year old son with actress Bridget Monyahan.

She continues: "It's unfortunate that in an interview sometimes things can seem so black and white. I am sure if I would just be sitting talking about my experiences with other mothers, we would just be sharing opinions."

In the Harper's Bazaar interview, Bundchen said, "Some people here (in the US) think they don't have to breastfeed, and I think 'Are you going to give chemical food to your child when they are so little?' I think there should be a worldwide law, in my opinion, that mothers should breastfeed their babies for six months."

She explains on her blog: "I understand that everyone has their own experience and opinions and I am not here to judge. I believe that bringing a life into this world is the single most important thing a person can undertake and it can also be the most challenging. I think as mothers we are all just trying our best."

(Photo credits: courtesy of Emmy Rossum and Gisele Bundchen).
Posted by Josie at 10:16