Fans of Joe Avati and co... rejoice and give thanks to Dio! His new show has arrived - and it's all about 'il Santo Natale'. It's not just about the Ities, though. Read on for more (plus show dates) below. Here is the poster for the new show, 'A Very Woggy Xmas', which starts from December 10, in Melbourne, Sydney and Adelaide! 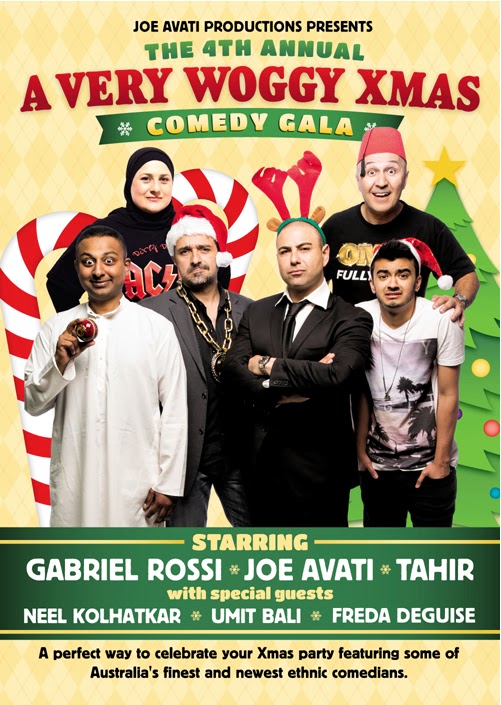 Bringing their very own version of Christmas cheer back for its fourth year in Sydney and Melbourne (and for the first time in Adelaide), 'A Very Woggy Xmas Gala is here again packed with hilarious and well honed stand up sets, ‘wogified’ Christmas carols and political incorrectness at its best.

Joining them on stage will be Aussie Indian comic Umit Bali and Neel Kolhatkar, who shot to fame recently with the YouTube viral video ‘Australia in 2 Minutes’, generating over two
million hits in five months.

The critics love the show, saying:

“Avati takes it (comedy) to new heights with his uncanny ability to continually reinvent the genre.” Herald Sun, Melbourne

“Tahir is brilliant! Really knows how to work an audience.” Sydney Morning Herald

This promises to be the biggest and woggiest Christmas of them all - a show for all ages. Bring the family – all 72 of ‘em!

Tickets on sale now from http://joeavati.com/shows

The SYDNEY dates are below (please see website above for Melbourne and Adelaide dates):

And Joe Avati Productions have been kind enough to give Josie's Juice readers the chance to see the show - in either Sydney, Melbourne or Adelaide.

Lots of double passes are up for grabs for any of the shows above (unless it is sold out), and here is all you need to do to be in the running to win a double pass (competition will run until Joe's last show on December 23).

*All steps above must be followed in order to be eligible. Comp open to Australian residents only)
Posted by Josie at 22:49

Email ThisBlogThis!Share to TwitterShare to FacebookShare to Pinterest
Labels: Australiana, Comedy, Italophile, This Just In