This wins the internet this week.

US President Barack Obama taking a selfie with British PM David Cameron and the Danish PM Helle Thorning-Schmidt at the Nelson Mandela memorial service, while Michelle Obama observes the unofficial selfie 'rule'... only three heads, max, in a photo: 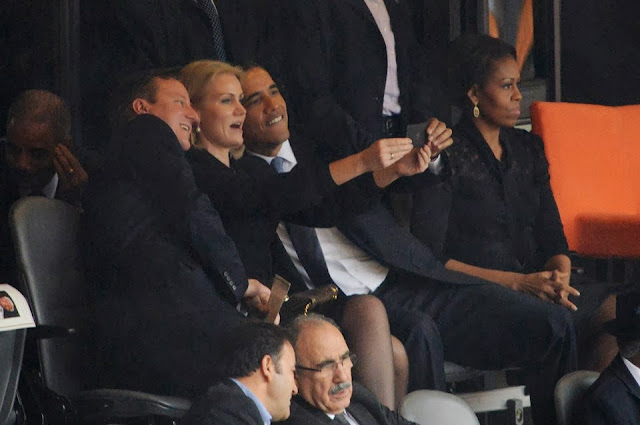 Don't know how impressed Michelle is in the following pics, though: 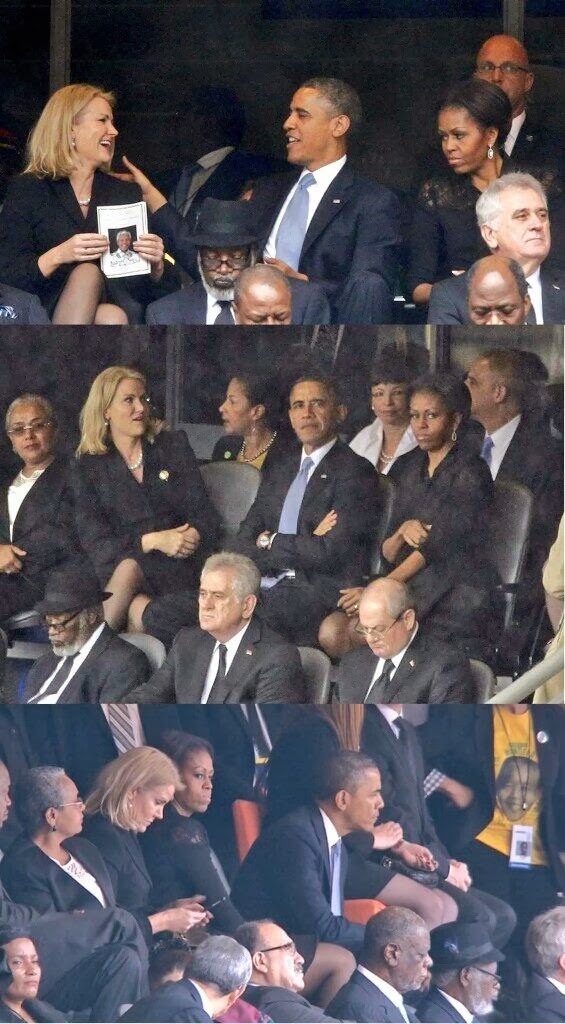 And now, the photographer of these photos responds. He reveals what actually happened before and after the shots were taken, and the vibe of the memorial service.

So here’s the photo, my photo, which quickly lit up the world’s social networks and news websites. The “selfie” of three world leaders who, during South Africa’s farewell to Nelson Mandela, were messing about like kids instead of behaving with the mournful gravitas one might expect.
In general on this blog, photojournalists tell the story behind a picture they’ve taken. I’ve done this for images from Pakistan, and India, where I am based. And here I am again, but this time the picture comes from a stadium in Soweto, and shows people taking a photo of themselves. I guess it’s a sign of our times that somehow this image seemed to get more attention than the event itself. Go figure.

Anyway, I arrived in South Africa with several other AFP journalists to cover the farewell and funeral ceremonies for Nelson Mandela. We were in the Soccer City stadium in Soweto, under a driving rain. I’d been there since the crack of dawn and when I took this picture, the memorial ceremony had already been going on for more than two hours.
From the podium, Obama had just qualified Mandela as a “giant of history who moved a nation towards justice." After his stirring eulogy, America’s first black president sat about 150 metres across from where I was set up. He was surrounded by other foreign dignitaries and I decided to follow his movements with the help of my 600 mm x 2 telephoto lens.
So Obama took his place amid these leaders who’d gathered from all corners of the globe. Among them was British Prime Minister David Cameron, as well as a woman who I wasn’t able to immediately identify. I later learned it was the Danish Prime Minister Helle Thorning Schmidt. I’m a German-Colombian based in India, so I don’t feel too bad I didn’t recognize her! At the time, I thought it must have been one of Obama’s many staffers.
Anyway, suddenly this woman pulled out her mobile phone and took a photo of herself smiling with Cameron and the US president. I captured the scene reflexively. All around me in the stadium, South Africans were dancing, singing and laughing to honour their departed leader. It was more like a carnival atmosphere, not at all morbid. The ceremony had already gone on for two hours and would last another two. The atmosphere was totally relaxed – I didn’t see anything shocking in my viewfinder, president of the US or not. We are in Africa.
I later read on social media that Michelle Obama seemed to be rather peeved on seeing the Danish prime minister take the picture. But photos can lie. In reality, just a few seconds earlier the first lady was herself joking with those around her, Cameron and Schmidt included. Her stern look was captured by chance.
I took these photos totally spontaneously, without thinking about what impact they might have. At the time, I thought the world leaders were simply acting like human beings, like me and you. I doubt anyone could have remained totally stony faced for the duration of the ceremony, while tens of thousands of people were celebrating in the stadium. For me, the behaviour of these leaders in snapping a selfie seems perfectly natural. I see nothing to complain about, and probably would have done the same in their place. The AFP team worked hard to display the reaction that South African people had for the passing of someone they consider as a father. We moved about 500 pictures, trying to portray their true feelings, and this seemingly trivial image seems to have eclipsed much of this collective work.
It was interesting to see politicians in a human light because usually when we see them it is in such a controlled environment. Maybe this would not be such an issue if we, as the press, would have more access to dignitaries and be able to show they are human as the rest of us.
I confess too that it makes me a little sad we are so obsessed with day-to-day trivialities, instead of things of true importance.
To read the reactions to Roberto's post, click here.
Posted by Josie at 08:15