Comedian Rove McManus and his actress wife Tasma Walton have had a baby, two weeks earlier than their due date.

The elated couple (look at their faces! They say: "look what we made!") announced Tasma gave birth to Ruby Aurelia McManus last Monday, December 16, in Sydney at 9.01am, more than a fortnight ahead of her January 2 due date, according to The Sun-Herald.

Here is a photo: 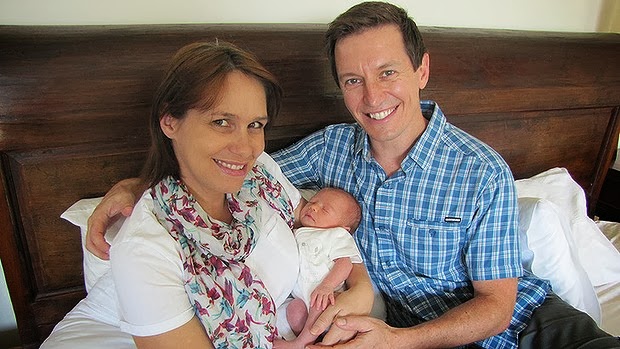 Ruby was born at a cute, teeny 2.47kg you always know how small that looks when you have babies of your own not far off that birth weight.
"It's still hard to believe she is here. It was love at first sight," Tasma said.
"She is a beautiful life-changing bundle."
"While she arrived slightly earlier than expected, she is healthy and more importantly it means she'll be here to spend Christmas with us, which is the best present you could wish for," added Rove.
"I feel I have entered a new life that consists of mainly of feeding and wiping. But I couldn't be happier," he said.
The private couple have made the decision not to sell their story or photos.

It has been a long and emotional road for Rove, who was married to the much-loved actress and singer Belinda Emmett, who died of breast cancer in 2006, after a long battle with the illness, and after they'd married in 2005.

What a beautiful couple, who have been blessed beyond measure with Ruby. You can see the delight in their faces!
Posted by Josie at 15:30