Social researcher Mark McCrindle has uncovered stats to support what we've long suspected: there is a man shortage in Australia.


The so-called "man drought", an expression often pulled out when talking about the dating 'situation' in Australia, has been used to describe the demographic reality in Australia, where the population of women exceeds that of men.

Currently there are almost 100,000 more women than men in Australia, with 6 out of 8 states and territories 'affected'.

McCrindle Research has crunched the numbers for us, naming the states and cities most afflicted by this 'drought'. Here it is in a handy info-graphic: 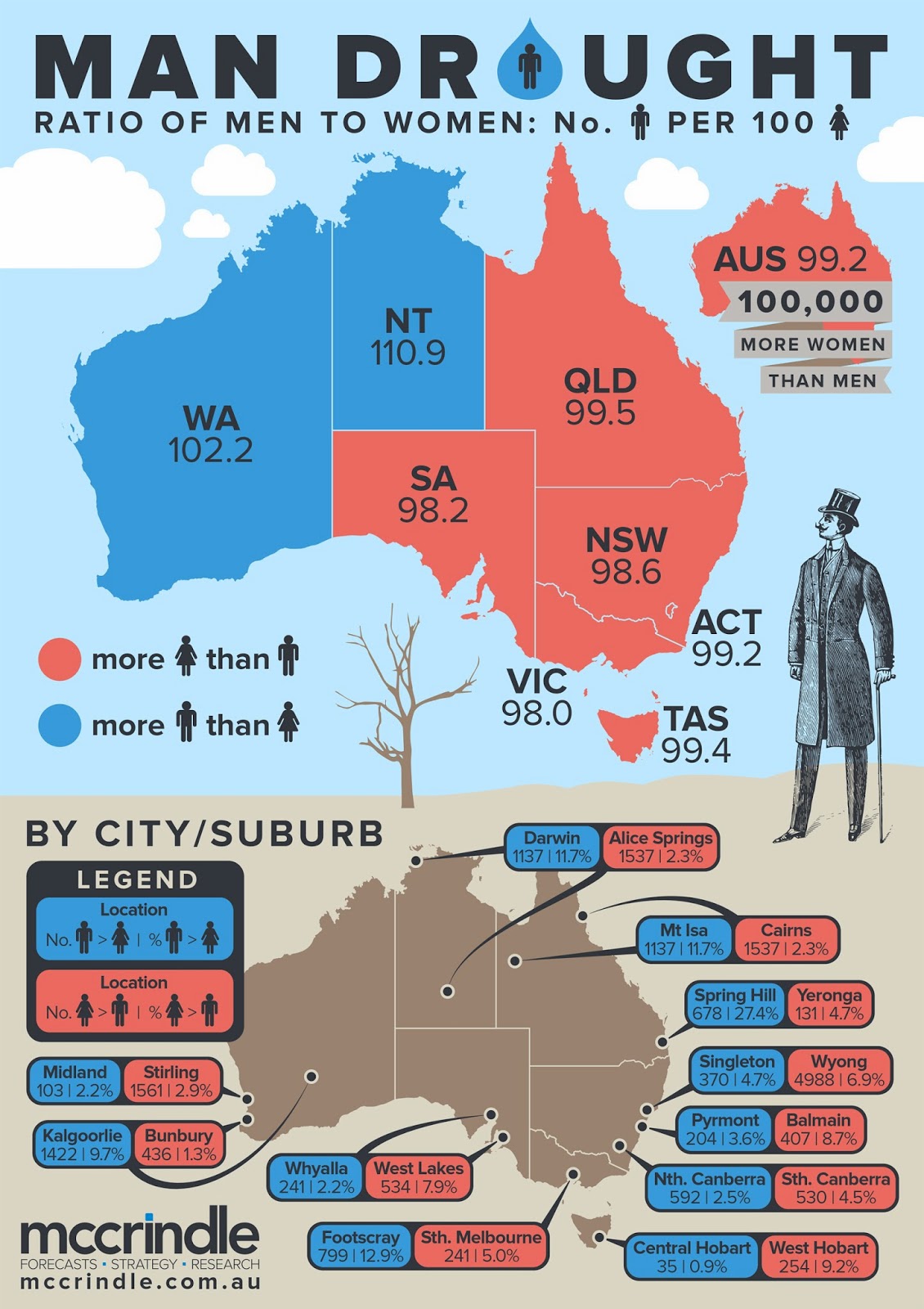 "The man drought is most evident during the working years (mid 30s to mid 60s) and is a sign of the global workforce flows and the propensity of Australian men to take advantage of overseas work opportunities. From the mid 70’s the man drought becomes far more evident as the longevity of women exceeds that of men (by the mid 80’s there are 50% more females than males).

Interestingly, WA and the NT have a surplus of men.

Says Mark: "The reliance of WA and the NT on mining (Australia’s biggest sector by employment numbers) and the dominance of males to females in this sector (85%:15%  is the reason that there are far more men than women here. In addition the dominance of Defence bases in the top end, and the younger average median age of these areas (the older, the more likely the man drought) drives these demographics. For more, see here.

The epicentre of the man drought? It's in Victoria. How so?

"With the second lowest fertility rate in Australia (after the ACT), there are fewer births (the source of more males compared to females) and an older median age (a driver of more females to males) and no male dominated sectors (mining, defence etc) and as a state that has been the provider of much of the mining labour in WA, it leads Australia in the man drought stakes.

This is my fave part of the research: advice to the women who complain they can’t find a man?

"Look for younger men: men exceed women until age 36. In Australia brides are on average 2 years younger than grooms, and brides are marrying later (average age of marriage female: 28, Male 30). However if a 28 year old female looks at males of the same (or slightly younger age), there are 103 males for every 100 females.

Look overseas (there are more than 70 countries with more males than females), look interstate (as our man drought map shows) but also look locally- there are sometimes even adjoining suburbs, one having more males and the next having more females- a quirk of employment, education and housing options in these specific suburbs," says Mark.

What's your experience of dating 'out there'? Lots of choice, or very limited?
Posted by Josie at 17:30