It was a sombre, beautiful, at times very funny and uplifting memorial service for Charlotte Dawson in Sydney today.

Held at the The Beresford Hotel, hundreds came to pay their last respects to the TV host, model and author. Organised by longtime employer Foxtel, invited guests were mostly dressed in colourful outfits, as was the wish of organisers.

The TV star was, sadly, found dead at the age of 47 in her Woolloomooloo home last weekend.

Charlotte's sisters Vicky and Robin (who had flown in from their native New Zealand for the private funeral held on Wednesday, where only a handful of family attended; Charlotte was cremated in a tangerine Alex Perry dress and René Caovilla shoes) also spoke.

Before the service, there was much sadness yet joy amongst the crowd. Guests mingled and chatted, and it was obvious that many were either longtime industry friends, or hadn't seen each in a while, and this sad occasion brought them together. Drinks were served, white flowers and candles were everywhere, and all the wide-screen TVs around the room featured this beautiful image of Charlotte: 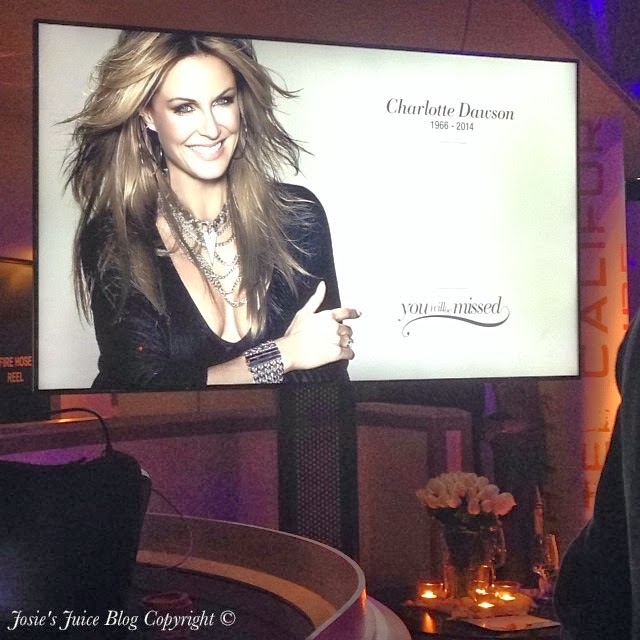 Post-memorial, food and drinks were served, and you'd be forgiven for thinking it was a standard Sydney event attended by media. Of course, this was vastly different.

The speeches were beautiful. Richard Wilkins introduced Charlotte's sisters. The most poignant words I recall was how they described how they dressed up baby Charlotte in a pink dress and popped her on a rug. They told how she looked like a doll. That made me cry: we are all teeny, tiny cute little babies our family fuss over at some point. I can't explain why that made me want to cry and not stop; perhaps because it tapped into the innocence of our youth, and the simplicity of life when we are quite simply, adored. And that's the sentiment Alex Perry echoes when he later speaks about Charlotte.

Vicky and Robin also recounted how desperately she missed her mother, crying inconsolably, when she started school, and she'd cry and cry, waiting for her at the school gate.

They also recounted that in Charlotte's mother's final days of battling dementia, her face would light up when her daughter visited. And she'd say: "Is that my girl?" Tears.

Throughout their speech, Charlotte's ashes were placed on stage's lectern, "so she can see everyone".

They said about their sister: "You were beautiful in body and soul. Talented, loving, funny, sarcastic, indiscreet, fun-loving, and humorous."

Alex Perry gave a wonderful speech. Admitting from the outset he'd been pondering on what to say for four days, he declared he would find it impossible to keep the speech to five minutes.

He elicited the most laughter in the room; he started the speech by telling the assembled crowd how much amusement and laughter Charlotte got from… farts.

The room was in stitches as Alex recounted all the various places Charlotte enjoyed that joke. He said they'd met in 1997 and from the outset they stuck together like "shit sticks to a bear's bum." He was the 'shit', he clarified, to much laughter. Their bond was obvious and unbreakable. There were lots of stories told.

This right here, said Alex, was Charlotte's all-time favourite video of all her YouTube funny video obsessions. She made Alex watch it 20 times:

He said about Charlotte: "There was all that incredible laughter, that glamazon that used to walk on the red carpet. It was all there, but there was a beautiful, fragile girl underneath there who just really wanted to be loved."

In light of Charlotte's constant battle with Twitter insults, Alex ended his speech by declaring he would no longer sit by and watch social media trolls have their way. "Fuck that," he said. The room erupted in applause.

Head of Foxtel, Brian Walsh, also spoke about Charlotte's supreme professionalism, once famously stepping in for the 'Australia's Next Top Model' live televised grand final at the eleventh hour, and doing a stellar job. He also talked about Charlotte's legacy.

"To talk about depression, and take away the shame. To ask the question: 'Are you okay?' To tell your loved ones that you care for them, and you'll always have their back," said Brian.

The Sunday Telegraph gossip columnist Ros Reines also spoke at the event, and told of their decades' long friendship.

It was a fitting tribute to a sparkling star. As Richard said: "Charlotte was, as we all know, one in a million. An original." And we all agreed with Richard's opening line, declaring that we all wish we weren't at this event; instead, that Charlotte would still be amongst her friends and peers and people who adored her.