The Seven Network has secured the first interview with Schapelle Corby post-release, for a reported three million dollars.

According to this SMH article, not only did Schapelle score this hugely profitable deal after being freed from jail, she used the media bidding war as payback to Channel Nine for airing the movie about her 'Schapelle', with the network not even able to put an offer on the table.

The article said the exclusive Seven deal - without a doubt one of the biggest chequebook journalism deals in Australian TV history - may have been formalised long before the dramatic events of recent days, when the convicted drug smuggler's parole was approved by the Indonesian government.

Schapelle was whisked away to a luxury Bali villa called Sentosa Seminyak (with a Channel Seven crew in tow) in amongst a convoy of black cars when she left her last stop of the Corrections Office in Bali, with the security provided by the very network who has stitched up the deal for her. Here is what her villa looks like: 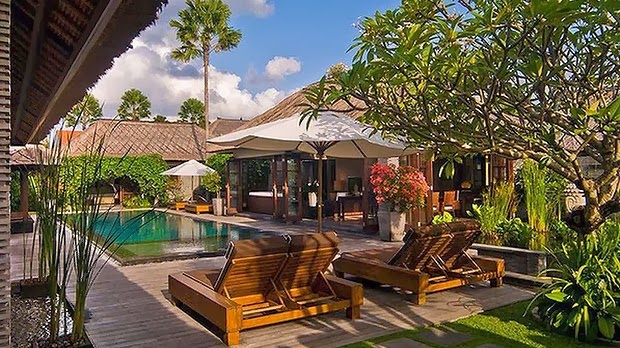 Which further explains the bizarre Schapelle cover-up yesterday - it was always going to be to protect her from an imminent interview.

Of course, this means Seven is charged with continuing to manage the media frenzy we saw on on Monday. The article conntinues:

Another industry figure told Fairfax Media that the deal, though a clear coup for Seven, came with complications - including the problem of avoiding confiscation of the money under proceeds of crime laws.

"[They've got to] keep Schapelle hidden away to protect the asset, hence the squad of ... black cars today. That's a bad look over time. Then there's the small matter of what she can actually say and not breach her parole and invite the wrath of the [Indonesian] legal system."

Email ThisBlogThis!Share to TwitterShare to FacebookShare to Pinterest
Labels: Controversy, News, This Just In