In news just in, Us Weekly has revealed that Hugh Hefner, Playboy founder and ex-partner of Holly Madison, who has written a book about her time at the infamous Playboy mansion, has finally spoken about what Holly has written about him. 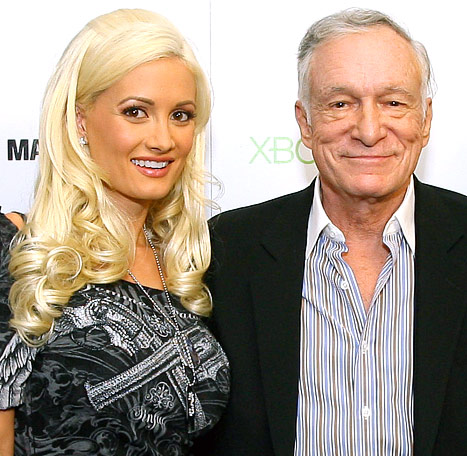 After Holly came forward with controversial claims against Hugh in her tell-all memoir 'Down The Rabbit Hole: Curious Adventures and Cautionary Tales of a Former Playboy Bunny, Hugh tells Us Weekly in an exclusive statement on Sunday, June 21:

"Over the course of my life I’ve had more than my fair share of romantic relationships with wonderful women," the Playboy founder explains to Us. "Many moved on to live happy, healthy and productive lives, and I’m pleased to say remain dear friends today. Sadly, there are a few who have chosen to rewrite history in an attempt to stay in the spotlight. I guess, as the old saying goes: You can’t win 'em all!"

As detailed in a previous issue of Us Weekly, Madison claims in exclusive excerpts obtained by Us that while living in the Playboy Mansion with Hefner she was verbally and emotionally abused.

Holly, who is now happily married to Pasquale Rotella and is mother to 2-year-old daughter Rainbow, also claimed that Hugh was a “manipulator” and would “pit” the girls against each other.

“I realized I wasn’t treated well,” Holly said. “I’m done being afraid of people. I don’t have any loyalty to Hef. I haven’t talked to him in four years, so there’s no reason to reach out now. Besides, it’s the truth.”

Read the whole piece and many more links here.

Read more about the book here.
Posted by Josie at 12:12

Email ThisBlogThis!Share to TwitterShare to FacebookShare to Pinterest
Labels: Americana, Controversy, Everyone is talking about, Men, Playboy, Reality TV, This Just In, Women