We love a guest blog on Josie's Juice, and today's post is from Modernize.com

There’s something about the world of celebrity that most of us find fascinating. Perhaps it’s the mysterious smiles we see on the red carpet or how we imagine them sipping champagne out of solid-gold flutes in between takes for the next blockbuster film. Of course, it doesn’t hurt that most celebrities live in mansions that make our humble abodes look like shacks. Here are some of the most impressive celebrity homes down under and how you can get a similar look in your own home.

Hollywood A-lister Cate Blanchett and her husband Andrew Upton have added Sydney to the growing list of international cities that the couple calls home. Located in the picturesque Berowra Waters neighborhood of northern Sydney and situated along the Hawkesbury River, the three-story riverfront estate set the couple back about $1.5 million and is accessible only by boat.

Although the property is described as lacking “bling” and an escape from glamour, it’s a wooden beauty that affords the couple talking trails through the surrounding bushland, a sauna and spa, plenty of room for entertaining, stunning views of the river, and of course plenty of protection from the prying eyes of paparazzi.

The Look
If you want to incorporate the minimalist, nature-inspired look of the Blanchett residence, it’s definitely not hard to do. First thing’s first, you’ll need to adopt an airy color palette consisting of whites, off-whites, creams, and maybe something like a sandy khaki. For contrast, use lots of contemporary or transitional wood furniture, preferably darker woods such as walnut, oak, or even cherry.

We love the cozy reading nook she created that brings the outdoors in with views of the water and an assortment of mismatched pillows. 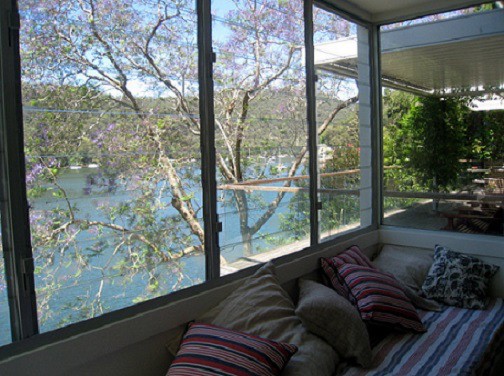 The ideal flooring would be, of course, hardwoods throughout, but you might also use tile or high-quality laminates; while carpets should be avoided for the Blanchett look, choose darker and more natural colored berbers such as an olive green and shades of brown if you’re a carpet enthusiast. In terms of upholstery, you’ll want to stay within the same bright, airy family as the wall colors. If you would prefer to add a little more visual interest, play with pops of color such as a red throw pillow or a fun, colorful area rug. Pin stripes would be a great, subtle pattern for upholstered furniture used to recreate the Blanchett look.

It’s clear that Cate gets a lot of use out of that reading nook as she has chosen to display her books on a built in shelf on her kitchen island. Making use of your kitchen island as a book shelf is such a lovely touch and can come in really handy when you want to keep your cookbooks nearby as well.

Another famous celebrity couple call the exclusive Southern Highlands in New South Wales their home. Nicole Kidman and Keith Urban’s classic French country manor was completely and totally restored to its current glory. It features wraparound verandas, a stunning entryway and staircase, a wine cellar and tasting rooms, a billiards room, a conservatory, and a separate guest cottage. Each of the five bedrooms also have a private bath and a dressing room. The sprawling grounds feature plenty of old trees and pristine lawns as well as a detached four-car garage. Inside and out, this huge home has a refined character that commands authority and respect, but also evokes comfort and homeyness.

Another famous celebrity couple call the exclusive Southern Highlands in New South Wales their home. Nicole Kidman and Keith Urban’s classic French country manor was completely and totally restored to its current glory. It features wraparound verandas, a stunning entryway and staircase, a wine cellar and tasting rooms, a billiards room, a conservatory, and a separate guest cottage. Each of the five bedrooms also have a private bath and a dressing room. The sprawling grounds feature plenty of old trees and pristine lawns as well as a detached four-car garage. Inside and out, this huge home has a refined character that commands authority and respect, but also evokes comfort and homeyness.

The Look
Are you infatuated with French country decor? You’re definitely not alone. There’s something both elegant and sophisticated yet charming and homey about French country decor, and many people simply cannot get enough of it. If you want to go French country similar to the Kidman-Urban compound, here’s what you need to do: First, you’ll want to use lots and lots of toile, which is the traditional patterned linen that screams 18th-century Versailles and can be used for sheets, curtains, and just about everything in between. Toile goes beautifully with stripes, but you can also use solids and plaids as well. 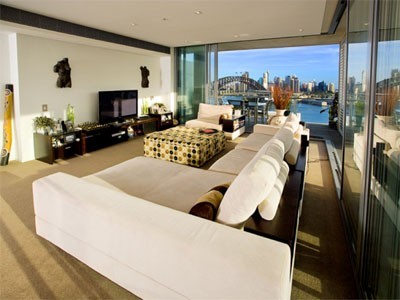 There are many other hallmarks of the French country look, one of which is using lots of white-washed wood furniture. In terms of color, stay on the warmer side of the color wheel, focusing on colors like goldenrod and dusty coral; however, you’re more than welcome to throw in a faded cerulean here and there to go with the blue-and-white china you’ll want to display. Incorporate some wrought iron furniture, perhaps some chairs or a table that can either be left raw and dark or painted white. Don’t forget to put down some lace doilies as well.

Kidman and Urban also own and combined several top-level penthouse units of the Latitude, a residential skyscraper that affords residents with breathtaking views of Lavender Bay in Sydney. The first unit — a two-story penthouse suite that consisted of essentially half on the 21st floor — was purchased by Kidman in 2009 for $6 million. In 2011, Kidman purchased a 19th-floor unit for $2.68 million to be used primarily as a home office. A year later, Kidman purchased the other 21st-first floor two-story unit for $7 million and turned the two separate penthouse suits into a single unit, which also broadened her view to include the southern end of Lavender Bay. Altogether, the actress has spent almost $15.7 million in buying some of the Latitude’s highest floors and sweeping panoramic views to enjoy with husband Keith and their children.

The Look
Maybe you’re not into the shabby-chic look. In that case, you might prefer decor that’s more stylish and modern like that of the Kidman-Urban penthouse. To achieve this look, you’ll first want to adopt a Blanchett-esque color palette for the walls, focusing on light colors that keep the space night and bright. Although the penthouse is definitely modern, it’s still very comfortable with an exaggerated sectional sofa, dark tan carpets with furnishings that tend to be very short and remain close to the floor.

For the furnishings, dark wood is used in a very contemporary, geometric style. There are also some fun, playfully patterns used such as the polka dots on the ottoman that provide an opportunity for pops of color and to create more visual interest. The kitchen area could also continue these colors and textures, or provide a bit of contrast like the penthouse balcony pictured above with gray tile, metal furnishings, and dark gray upholstery.

For more design ideas and inspiration, head to Modernize.com.
Posted by Josie at 11:48