The new edition of Cleo magazine is out today, and Kelly Osbourne is the cover girl: 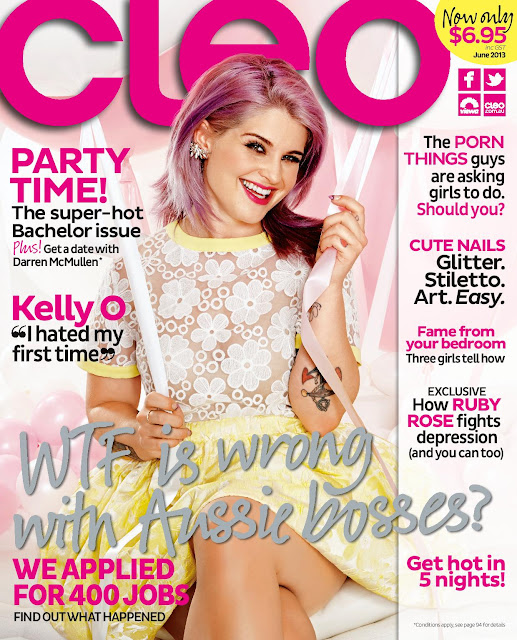 In this issue, several meaty issues are tackled, again.

After the successful relaunch issue (editor Sharri Markson says the first, revamped issue was "amazingly well received; hundreds of girls told us they finally they have a magazine they love which has interesting articles in it. And we've been thanked by countless women; having that direct connection is wonderful"), the new issue keeps up the momentum with stories like these:

RUBY ROSE
She shocked us when she cancelled her Aussie tour to seek treatment for depression. And now, Cleo is the only magazine to score an exclusive interview her. The mag's investigative reporter Rosie Squires chatted with Ruby about her life-long battle, surviving several suicide attempts, and forging a high profile successful career - all at odds with her inner struggle. It’s Ruby’s first in-depth interview about her illness born from a determination to help other young people deal with depression.

Watch the Ruby Rose interview with Cleo below. And share. This woman is inspiring:

"It was really brave of her to do the interview," says Sharri. "Over the years she’s said that she found it diffucilt to talk about her depression in detail, and to share her full story. When we approached her it was when she’d just announced she’d taken time off. She’d said publicly that she was losing her battle with depression and she needed to take time off to focus on treatment. And hald way through her 90 days of treatment, we flew our team to LA and she sat down and told us the whole story, and told it on camera as well because, you know, she felt it was important for young men and women around the country to know what she was going through.

"She actually feels like she was put on this earth to help people who are suffering from simlar things. She’s had a really tough time over the years, and the whole story came through, that while she was forging this high profile public career she was struggling the whole time - it’s a great interview.

"She was honest, she could’ve done the interview with anyone. We didn’t pay her any money, she never asked for money, there was nothng like that, she literally wanted to share it with young Australians, through Cleo."

Indeed, whe Ruby made the announcement she was stepping away to seek treatment, she was in the midst of promoting the Jag jeans brands, for which she is spokesperson and print ad model.

"The video is brilliant and something people will benefit from. I hope it helps people... I think it will. We gave it the space it deserved too - we gave it six pages, in the magazine, plus the full video online as well."

Here's the opening page of the interview: 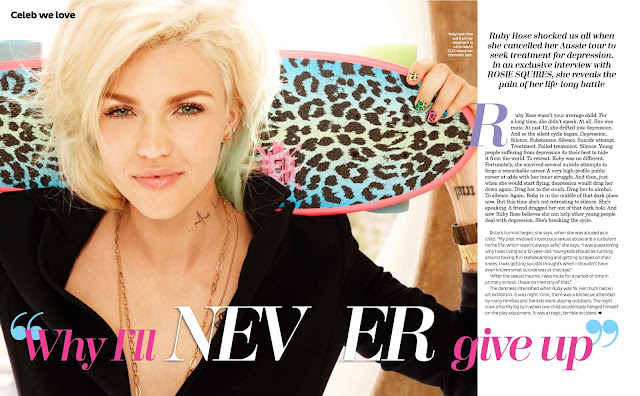 THE PORNIFICATION OF SEX

Medicare figures, exclusive to Cleo show a four-fold increase in labiaplasty since the 1990s. "There's this perception that women should have a prepubescent Barbie-doll look of genitals." says Professor Ajay Rane of the Royal Aus & NZ College of Obstetricians and Gynaecologists.

Those Medicare figures are kinda surprising.

We spoke to a lot of girls for the article, and they don’t know what’s expected of them, what’s 'normal'.

It’s reflected in the series ‘Girls’ – we open the feature with a scene from 'Girls', in which Adam asks his girlfriend to crawl through to his bedroom and then he comes on her. That scene was so controversial, it went off.

In real life, girls are confused and confronted by this and they’re not sure what to do. We explore that in this article

JESS RUDD, CLEO COLUMNIST: ON LEGALISING GAY MARRIAGE
Jess says she will never understand the arguments against same-sex marriage even when they fly from the lips of the people she loves and respects. To Jess’ mind, marriage is a right to be exercised between two consenting adults.

"Jess Rudd feels so strongly about this issue… she says there is not one logical reason why we shouldn’t be legalising gay marriage. She says in the article that she doesn't understand the reasons behind opposing gay marriage, even though they come from the people who are closest to her, making reference to her dad, I suppose.

UPDATED: on the day the mag went on sale, Kevin Rudd has now pledged his support of gay marriage, on his blog. Read more here.

"One line she says in the article which I love and hadn’t even thought of was about the criticism the gay community get the most about being promiscuous... and now, they’re trying to do the opposite and they’re getting criticised for it."

STEPHANIE RICE
One of the most intriguing Australian personalities right now is three-time Olympic gold medallist Stephanie Rice, who admits to drastic dieting and a private and ongoing body-image battle. With a burgeoning TV career as a health and fitness reporter on Channel Nine's 'Today' show, and as a reality TV star on 'The Celebrity Apprentice' Australia, Stephanie’s obsession with dieting especially during her final years of high school is finally behind her. She has now ditched the scales, and says a healthy diet makes you feel happy and energetic.

So how did the interview come about?

"I knew she was going to be on 'The Celebrity Apprentice', and she is one of those people who we don’t know much about her personal life," says Sharri.

"She revealed to us that when she was in her teenage years, she felt a lot of pressure to be skinny, she dropped her weight dramatically, and it affected her training, affected her coaching.

"Both her coach and her parents had to intervene to help get her back on the right track; she said that she felt the pressure to be skinny, her friends were not eating much at school and she did the same thing. And there had to be intervention to get her back on track. She said she learned a lot about nutrition and body image, and girls at school will relate to that."

Indeed, it’s inspiring to hear stories about people who you think have their life together, but don’t - knowing how they overcome their struggles can give the reader a big take away message.

"That’s what we’re trying to do more of at Cleo – the people we look up to and appear to totally have their life sorted... they open up about the struggles they’re going through and helping others along the way," adds Shari.

Again, the new issue of Cleo is a must-have for young adults and teens alike.