'The Collective' - or 'Renegade Collective' as its now known - is a new Australian magazine - distributed here and all around the world - which is jam-packed with content focusing on what the publisher identifies as game changers, thought leaders, rule breakers and style makers.

In the second issue of the magazine - for more on issue 1, click here - the cover woman is publishing dynamo Mia Freedman. Here is the cover: 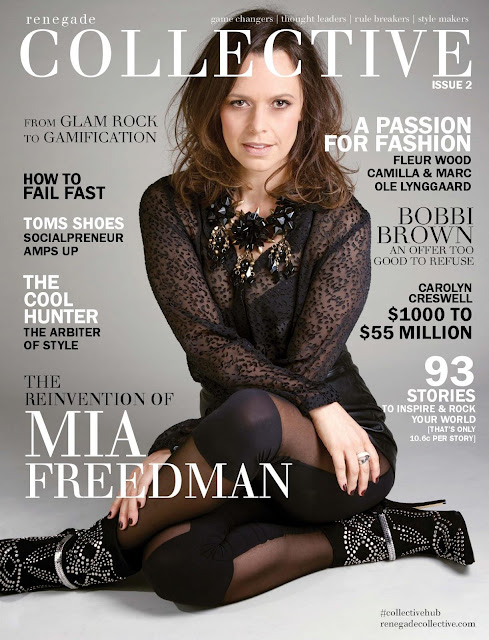 With the publishers explaining "hand on heart the cover shoot is 100% untouched", Mia talks with the magazine about her journey, which saw her battle anxiety and borderline depression following her ill-fated leap into TV, having been the golden girl of Australian magazines for over a decade.

“I had no confidence and I felt humiliated", says Mia.

With no job offers imminent, and a phone that wasn't ringing, she turned to the world of online, and there carved an indelible niche, and found a new voice. In the article, Mia shares her advice for emerging entrepreneurs, and is as passionate and open as you'd expect.


This month’s 'The Collective' is filled with 93 stories, including these:
THE COOL HUNTER - THE ARBITER OF STYLE: The Collective talks to Bill Tikos, the man behind the blog 'The Cool Hunter', which has become the ultimate ideas hub with a burgeoning fan base of marketers and designers.

GAMIFICATION - LET THE GAMES BEGIN: This story looks at our increasingly 'gamified' generation, including distracted employees, and a high adoption of mobile and social technologies, which has pathed the way for gamification as the best tool for bringing attention and engagement together for business.

THE NEXT SILICON VALLEYS: This story focuses on internet hubs including Tel Aviv, which enjoys the highest density of start-ups on the planet, to Russia which has successfully debuted on the world stage thanks to a number of successful Russian internet tycoons, to Bangalore, which has the potential for a prospering start-up scene.

WOULD YOU INK YOU SKIN FOR CASH? SKIN DEEP: This story examines how people are selling advertising space on their own bodies, including how some companies offer rewards to those willing to have corporate logos permanently inked on their skin.

THE LIPSTICK FACTOR: 'The Collective' catches up with Bobbi Brown, who founded the eponymous global cosmetic and skincare empire because she couldn’t find a lipstick she liked to work with or use. Brown-hued lipstick is still the brand’s top-selling product, and here Bobbi shares her journey with the magazine, as well as some secrets for success.