This incredible story is one I can't get enough of right now. The story of the three girls who were missing for a decade: Amanda Berry, Gina Dejesus, and Michele Knight.

Charles Ramsey - their neighbour - became a hero when he helped rescue three missing women.
Ramsey was eating at his home (Maccas, to be exact) south of downtown Cleveland when he heard screaming next door and went to investigate. That's when he saw Amanda Berry, a woman who went missing 10 years ago, and a young child. Berry was shouting for help and trying to get outside.
"I go on the porch and she said 'Help me get out. I've been here a long time.'" Ramsey said.
He told US TV's WEWS-TV that he was stunned by the news that these women had been held captive next door.
"I barbecue with this dude," Ramsey said. "We eat ribs and what not, listen to salsa music, you see where I'm coming from? Not a clue that that girl was in that house, or anybody else was in there against their will."

To read more, go here.
Ramsey and another witness broke the bottom of the door where Amanda had lived and been held captive for a decade, and freed the inhabitants. Inside the house were two other missing women: Gina Dejesus, who disappeared in 2004, and Michele Knight, who went missing in 2002.
Ramsey used his cellphone to call 911. Here is that call [warning: graphic language]:
And then... pop culture madness... why you so cheeky? As I watched the Charles Ramsey footage, I swear, I thought to myself: this is SO going to be given the autotune treatment.
And voila... here it is:


According to the creator of this video - 'G Money - "All money made from this monetized channel will go to the victims of this crazy situation. They will need plenty of mental therapy."

Never a truer word spoken. How much do you much do you feel for these women? As the story develops, news stories are confirming there have been at least five pregnancies during that time. And the families who thought they were missing, or dead; I wept as I saw the mother of one of them declaring "You're now safe!"

What do you think of this whole sorry catastrophe?

This madness has reached 1 million+ hits as of May 9. Watch the views continue to grow... 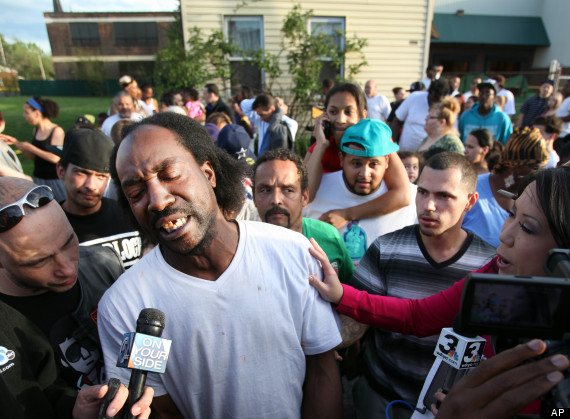