The highly anticipated TV series 'Paper Giants: Magazine Wars' will be starting this Sunday June 2 on ABC1. It stars Rachel Griffiths as Dulcie Boling and Mandy McElhinney as Nene King, below: 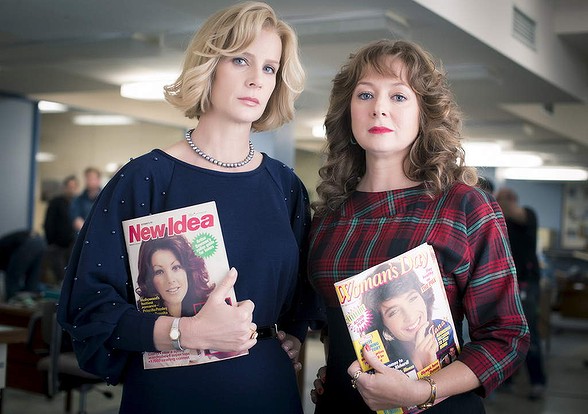 It tells the story of the golden years of the glossies, of the publishing 'battle' waged by Nene King and Dulcie Boling to make their publication the number one seller in Australia.

The year was 1987, so expect lots of fabulous '80s referencing in the two-part series like big, teased hair and massive shoulder pads. The Royals were still together and only showed hints of the dysfunction to come.

It was a time of publishing drama, as flamboyant deputy editor Nene King storms out of New Idea magazine to become editor of rival Woman's Day magazine, and is determined to overthrow the so-called 'queen of women's magazines', Dulcie Boling. The public start to lap up the excesses and flamboyant exclusives, and celebrities start to really know how to play the game, learning to exploit the magazines they claim to despise (this sneaky little practice continues today, of course, with stars staging paparazzi shots for their benefit). Soon, even the once untouchable topic of the Royals - Charles and Diana, Fergie and Andrew -  are devoured by a hungry media and curious public,and nothing is sacred anymore.

My good friend Kasey Drayton who worked at photo agency BIG Pictures for 15 years tells of her interactions with Nene King, as she reflects fondly about the good ol' days in publishing.

"The Woman's Day picture desk was next door to her office, and I used to go in once or twice into see the girls there. We had hard copy photos and trannies (transparencies) we lugged into the magazine offices."

Yes, that's right... the ol' trannies instead of jpegs we're used to today! I recall working with bromides when I started at Cumberland Newspapers in 1994... a story for another time.

Continues Kasey: "One day, I was telling them how I had colonics and Nene overheard. She yelled out from her office, "Hey you, come here and tell me all about colonics!"

"So I did… after that I was called the "colonic girl". She was truly one of a kind. She really was a whirlwind in the office - a real presence and everyone I dealt with loved her."


When Kasey started in journalism and picture editing, they had... TYPEWRITERS! In fact, when Kasey and her co-workers got their first computers, Kasey managed to delete the entire hard drive on hers. And yes, it was the era of smoking in the office, and non-smokers were bunched in with puffers and overflowing ashtrays, and it was deemed completely acceptable.

The series will show all the cut-throat madness of that era and will no doubt have others who lived through it, just as Kasey did, reminiscing about how it all used to be.

Paper Giants: Magazine Wars premieres Sunday June 2 at 8.30pm on ABC1 and is a two-part series.