Global superstar singer Mariah Carey, and one of the globe's richest businessmen James Packer are engaged.

E! News has exclusively learned that Mariah is engaged to the Australian billionaire after a fairytale romance - all seven months' worth of courtship.

According to E! News James 'popped the question' in her hometown last night US time, and he presented her with "what can only be described as the most breathtaking engagement ring", the report says.

We're told that Mariah's new diamond bling comes in at around 35 carats and that no wedding date has been set just yet.

It should come as no surprise James got down on one knee for the multi-Grammy Award winner. Their love affair began just under a year ago and from the moment they started dating, "they fell head over heels in love with one another, " says an insider. "It's crazy how perfect they are together, they both know it and couldn't be happier."

The couple went public with their relationship in June 2015, after they were seen on holiday together in Italy and pap shots surfaced of them strolling hand in hand.

James is 47, and is Australia's fourth-richest person, according to Forbes, with a fortune estimated to exceed A$4.7bn (US $3.1bn, £2.3bn).
Mariah Carey is 45, and is one of the biggest selling artists of all time.
This will be the third marriage for both. Mariah is mother to four year-old twins, son Moroccan Cannon and daughter Monroe Cannon, with ex husband Nick Cannon.
Mariah announced her break-up from 'America's Got Talent' host Nick in 2014.
She was previously married to Sony executive Tommy Mottola.
James has three children: Indigo, 7, Jackson, 5 and Emmanuelle, 3, with his second wife, model and singer Erica Baxter, from whom he split in 2013.
James's first marriage was to model and fashion designer Jodhi Meares, who was known as Jodie Meares when they married.
THE RING! It's right here... TMZ has the shots - and the VIDEO!

It all went down in NYC -- where Packer secretly rounded up a bunch of Mariah's close friends for a private dinner at Eleven Madison Park ... so he could get down on one knee and propose in front of the most special people in her life. 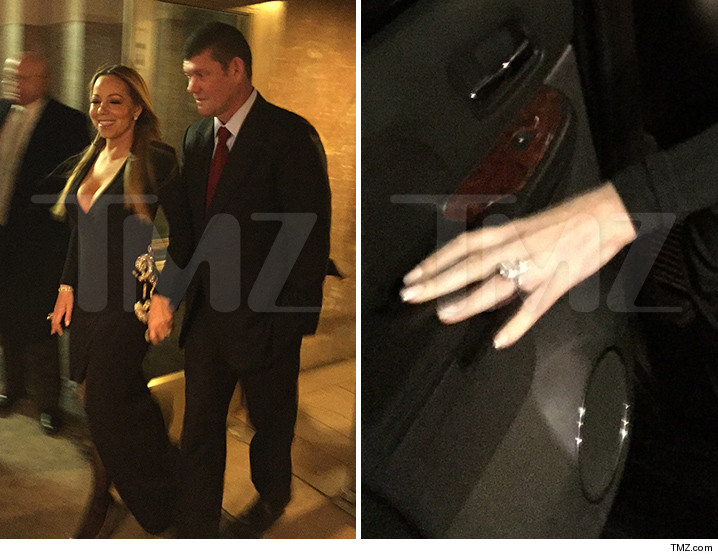 Email ThisBlogThis!Share to TwitterShare to FacebookShare to Pinterest
Labels: Celebrities, Everyone is talking about, Marriage, This Just In