Joaquín Guzmán Loera, the Mexican drug lord known as El Chapo, was interviewed by actor Sean Penn before he was arrested, for Rolling Stone magazine.

The article can be read in FULL HERE.

Disclosure: Some names have had  to be changed, locations not named, and an understanding was brokered with the subject that this piece would be submitted for the subject’s approval before publication. The subject did not ask for any changes.

An interview excerpt, from Sean Penn:

I take no pride in keeping secrets that may be perceived as protecting criminals, nor do I have any gloating arrogance at posing for selfies with unknowing security men. But I'm in my rhythm. Everything I say to everyone must be true. As true as it is compartmentalized. The trust that El Chapo had extended to us was not to be fucked with. This will be the first interview El Chapo had ever granted outside an interrogation room, leaving me no precedent by which to measure the hazards.
The seven hours El Chapo spent with Sean Penn, and the follow-up interviews by phone and video — which began in October while he was on the run — marked another surreal turn in his long-running effort to evade the Mexican and American authorities.

El Chapo was one of the world’s most wanted fugitives, who had twice escaped jail, was captured in his home state of Sinaloa in northwest Mexico on Friday after a gun battle with the authorities. 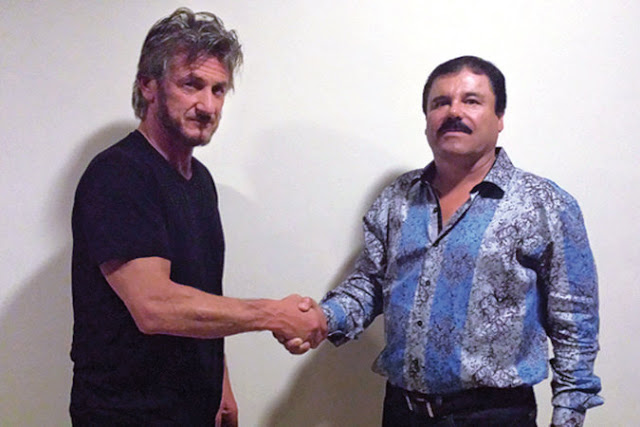 Email ThisBlogThis!Share to TwitterShare to FacebookShare to Pinterest
Labels: Controversy, Everyone is talking about, Movies, News, This Just In