This will be on free to air! 'UnREAL' - the show about the reality TV dating shows. I am looking at YOU, 'The Bachelor', 'The Bachelorette', et al.

Currently teasing us with its fabulousness on Australian pay TV portal Stan, it's finally on a  channel you don't have to pay for. Yay!

Ever wondered what went on after cameras stop rolling on your favourite reality TV show? Well leave your conscience at the door as SBS 2’s new hit U.S. drama bares all to expose the reality part of reality TV.

Premiering Monday 22 February at 8.30pm on SBS 2, UnREAL goes behind the scenes and under the sheets as it reveals what happens when TV producers are encouraged by cash bonuses to manipulate contestants to make seriously good TV.

Everlasting is the hit U.S. reality show where one hot bachelor gets his pick from over a dozen of the country’s most eligible and attractive single women. Sounds like a simple and romantic concept and one we’ve seen many times over. The catch? A young producer by the name of Shiri Appleby (played by Rachel Goldberg) whose sole job is to manipulate her relationships with and among the contestants to get the vital dramatic and outrageous footage that the program’s dispassionate executive producer, Quinn King (Constance Zimmer), demands. What unfolds is an eye-opening look at what happens in the outrageous world of unscripted television, where being a contestant can be vicious and producing it is a whole other reality, showing that bad people make good T.V.

Everlasting’s contestants include Grace, portrayed by Nathalie Kelley, who instantly wins Adam’s heart; Anna, played by Johanna Braddy, who is classy and shrewd, with her eye on the prize; Faith, a sensitive and vulnerable tomboy from America’s South portrayed by Breeda Wool; and Mary, played by Ashley Scott, a gorgeous single mum of one who has been unlucky in love.

As a HUGE fan of 'The Bachelor' (what!? So I've watched every series, American and Australian, and totally watched the first US 'The Bachelorette' wedding of Trista and Ryan), I say bring it on!

Here is how Ellen intro'ed UnREAL in a clip on reality TV (all the clips on here are bloody hilarious!): 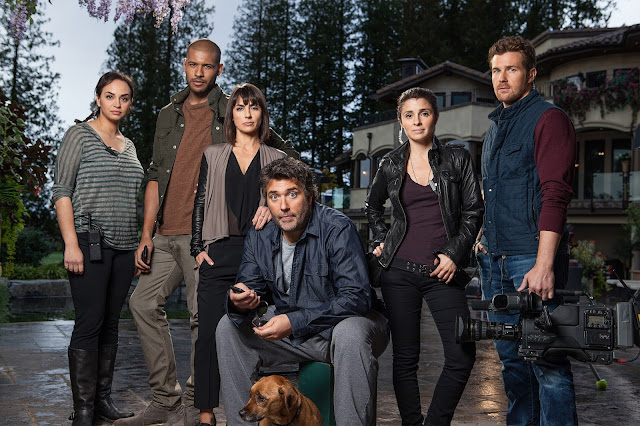