This... another BIG story for the week on the back of the Chris Gayle 'controversy'. Sit back and watch it unfold, folks. But it looks like it'll blow over before its even begun? We hope? 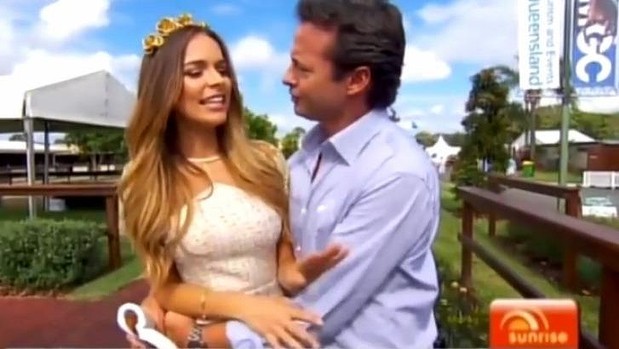 He has already apologised to Monika, following viewer complaints after he hugged her on air during her first shift as the Weekend Sunrise weather presenter.

Here is the footage:

Just days after cricketer Chris Gayle was criticised for his “inappropriate” on-air advances to Channel 10 sports reporter Mel McLaughlin, Hamish McLachlan has now been 'slammed' on social media for “flirting” with Monika
The beautiful 25 year old will be reporting on the weather for Weekend Sunrise for the next two weeks.
Monika was reporting from the Magic Millions horse sale on the Gold Coast with veteran sports journalist Hamish McLachlan, 40, who is a commentator of horse racing and AFL, came in shot.
"Is this your first day?" he asked Monika.
"Yes, Hamish. Professional please. My goodness," she replied.

Monika and presenters in the studio began to laugh as McLachlan stepped away.

"There's been stuff all week on that. I'll go. I'm out. I'm going. Sorry," he said, jumping over a wooden fence and standing on the other side as he looked back at Radulovic and the camera.

"It's her first day and she's flying."

After Hamish distanced himself physically from the embrace, he also gave an on-air apology.

With Monika by his side, Hamish said he had received a phone call saying "people were making a lot of" what happened.

"If I've offended anyone at home, I'm apologising for that absolutely," he said.

"But more importantly," he said, turning to his colleague, "I apologise if I've offended you."

"I was just trying to have fun, but it is my fault if I've offended you. Have I offended you?"

Monika shook her head and responded with a smile: "Not at all".

"I did not think twice about it. Like Hamish said, we're colleagues and friends and we were just chatting like we normally do off-camera."

So, can we all just be friends now and move on? Please...?

Here is the Josie's Juice interview with Monika - read whole interview here.
Posted by Josie at 11:12