Scott Schuman: on the future of magazines - GQ, June 2012

Scott Schuman - the man behind the street-fashion-staple-site The Sartorialist - has spoken to the latest US GQ magazine on a range of topics, but these quotes in particular are brilliant: 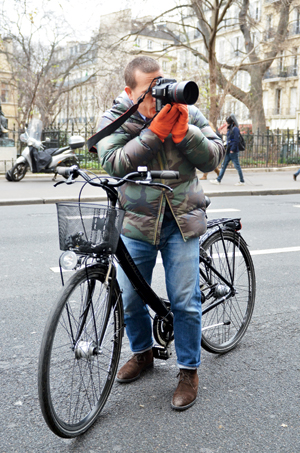 This is what he said about magazines in general:

But these pars - about the 'groundbreaking' 2009 Dolce & Gabbana show, which represented a real 'moment' for bloggers - written by writer for this piece Alex Pappademas - are pure brilliance:

"Dolce & Gabbana put Schuman—along with Doré, Tommy Ton, and Bryanboy—in the front row at a D&G spring/summer show in 2009, even gave them loaner laptops on little podiums, and it was the first time anybody had ever given up that kind of real estate in Anna Wintour territory to the insurgents from the Internet, and it's still cited all over the place as a paradigm-shift moment for fashion journalism. Women's Wear Daily ran a picture of it, which you can still find online. There's Bryanboy, computer-screen light reflected in his trademark Kim Jong-il glasses, which in this context look more like virtual-reality goggles from the '90s, which in turn make Bryanboy look like he's fully embracing the role of blogger sideshow. And here are Garance and Tommy, obviously enjoying the moment to no end, grinning at one of the laptops like they're watching a particularly entertaining kitten video—Tommy's wearing shorts, for God's sake. And here's Schuman on the far right, squinting hard at his iPhone screen like he's trying to send an e-mail telekinetically. He looks pissed. Humiliated, even.
Laptops. On little podiums. Like they were going to be sitting there typing fucking blog posts. Do they give Anna Wintour a mimeograph machine so she can crank out an issue of Vogue right there? No they do not. And actually having a laptop on a little podium in front of him (a) made it harder for Schuman to do what he would normally do in that situation, which is take pictures, and—one gets the strong sense that this was the real problem—(b) set him apart pretty decisively from the real front-row people, who didn't need some kind of blogger affirmative-action program. I ask Schuman if he felt like he'd been seated at the kids' table, and he says he did.
"They got a humongous amount of press," Schuman says. "Look, we brought the bloggers in and gave them the front row. Look at the dancing-monkey bloggers! I could barely bring myself to sit down." It's true, in the picture he almost looks like he's trying to escape. "Like, 'Ugh, I don't want everyone looking at us.' Like, Oh, look at the cute bloggers! Isn't that cute! Are they playing Angry Birds? When you've got Ron Frasch behind you going, 'I spent two fucking million dollars on D&G's last collection, and I'm sitting here? For these little schmucks?'"

And when Alex nabs quotes from Kanye West, it's just gold:
"Kanye talks about how the flash on the BlackBerry blows out people's faces when you try to take their picture with it. He says he wants to invent a camera where the flash comes at the subject from the side, somehow. He says this to no one and everyone, as if maybe someone here will take a note, jump on this sideways-flash project immediately.
And then this: "Scott gave me my first opportunity to be photographed in a different light than the normal rap way. So anytime Scott does anything, I don't care where I am in the world, I'll be there."

You can read the whole, very interesting article here: