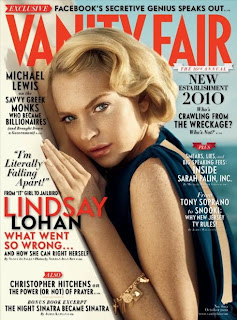 The human headline that is Lindsay Lohan is now Vanity Fair October 2010 covergirl. Snapped by Norman Jean Roy in Los Angeles aboard what was once the yacht of another child star, Judy Garland, the shoot features Lindsay dressed in an evening gown, looking glam in an old Hollywood way.

The interview with Vanity Fair was conducted in July, shortly before the 24-year-old star served 14 days in jail followed by 23 days of in-patient rehab for DUI probation violation. Actually, her VF appearance was meant to coincide with the release of her latest film, Robert Rodriguez’s Machete, in which Lohan plays a gun-toting nun.

She says in the article: “I want my career back. I want the respect that I had when I was doing great movies. And if that takes not going out to a club at night, then so be it. It’s not fun anyway. So many people around me would say they cared for the wrong reasons. A lot of people were pulling from me, taking from me and not giving. I had a lot of people that were there for me for, you know, the party.”

Early on she had the most interesting - and ironic - of role models. “I would look up to those girls... the Britneys and whatever. And I would be like, I want to be like that.”

Other interview highlights include:

On alcoholism: “If I were the alcoholic everyone says I am, then putting a [scram] bracelet on would have ended me up in detox, in the emergency room, because I would have had to come down from all the things that people say I’m taking and my father says I’m taking — so that says something, because I was fine.”

On drug abuse: “I’ve never abused prescription drugs. I never have — never in my life. I have no desire to. That’s not who I am. I’ve admitted to the things that I’ve done — to, you know, dabbling in certain things and trying things ’cause I was young and curious and thought it was like, O.K., ’cause other people were doing it and othe people put it in front of me. And I see what happened in my life because of it.”

On her estranged father Michael Lohan: “The worst part of it is you turn around and you see your dad crying and normally you’d be, like, happy that your father’s there. But then he has to go and do an interview right after. I think my biggest focus for myself is learning how to continue to get through the trauma that my father has caused in my life.”

On the future: “I don’t care what anyone says. I know that I’m a damn good actress.”

Let's see what your next picture looks like, La Lohan.
Posted by Josie at 23:21